A Bullish Breakout For Small Caps Is Underway

On Sept. 21, I wrote about how it might be time to consider going long in the Russell 2000 and upping exposure to the small-cap stocks that, as a whole, had lagged the year-to-date performance of the Dow, S&P and Nasdaq.

Smaller companies have been hit harder than big ones by the COVID-19 Delta strain, mandates, labor shortages, supply-chain disruptions and the rising costs of inputs and shipping from third-party providers that have been crushed by demand and severe wait times. The distribution of assets for a broad-based index is attractive in the current market landscape, which has been rewarding the top-weighted sectors.

Six weeks later, the chart of the iShares Russell 2000 ETF (IWM) is trading at about the same level, but with the 20- and 50-day moving averages beginning to lift off of the 200-day moving average (black). The basing formation is getting longer, and investors haven’t missed out if the small-cap train does, in fact, leave the station. 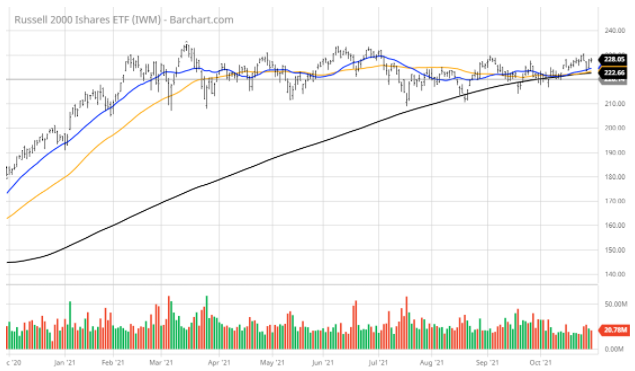 Six weeks later, the chart of the iShares Russell 2000 ETF (IWM) is trading at about the same level, but with the 20- and 50-day moving averages beginning to lift off of the 200-day moving average (black). Unlike the exchange-traded funds (ETFs) such as SPY and QQQ, where there is a very high concentration of total asset weighting of 27.5% and 55.6%, respectively, that account for the top 10 holdings of each ETF, the top ten holdings in IWM represent only 2.9% of total assets — quite a difference given there are 2,026 total stocks in IWM.

There are a couple of other ways to invest in the small-cap arena that can be considered for investors seeking exposure here. The iShares Core S&P Small Cap ETF (IJR), which holds 603 stocks and has Assets Under Management (AUM) of $70.2 billion, actually has more AUM than IWM, indicating to me that institutional money prefers a reduced number of positions on a more select basis. 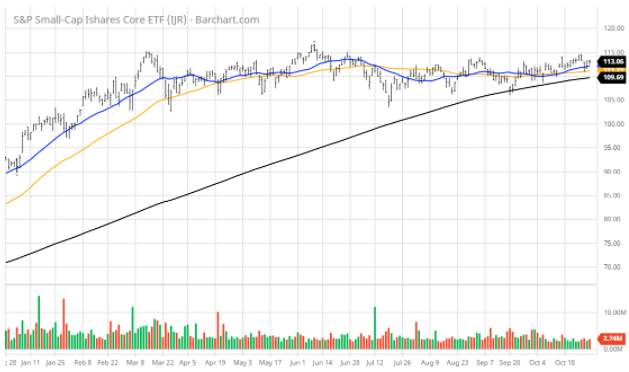 The chart of IJR is very similar to that of IWM, so owning either seems to work, given the high price correlation, at least for now. I prefer the blend of the top holdings in IJR over that of IWM. That’s just a personal choice. In any event, as capital flows continue to find their way into the stock market, it stands to reason that the small-cap sector will have its day in the sun soon, especially with the Dow, S&P and Nasdaq all technically overbought heading into this week.

Small caps have lagged as the ultimate growth stocks. They are viewed as the most vulnerable to inflation and, to date, that has been a legitimate concern. However, the Conference Board just released its latest forecast for U.S. gross domestic product (GDP), showing a notable slowing in 2022 and again in 2023. If GDP does decline from its 5.7% rate to 3.5%, then bond yields won’t likely climb much higher than where they currently stand.

It is still very early to make this call, but any relief in energy prices and the supply-chain backups will bring down the Consumer Price Index (CPI), Producer Price Index (PPI) and personal consumption expenditures (PCE) figures, which should translate into a higher level of confidence for small-cap investing. We’ll know more about how this scenario could unfold after Fed officials make their thoughts and plans for the economy public, as well as having a chance to assess wage inflation with the next set of labor statistics.

I am bringing the Russell 2000 to light again because it has the most potential as an index to outperform going forward. The next five months could be the best period for being long in stocks in general, the way we are all familiar with the term “the bigger the base, the higher the space,” as technical jargon for when a stock or index finally breaks out of its basing formation.

What I also like about this investment proposition is that most of the companies in the Russell are domestic businesses. The United States seems to be on much better economic footing than European, Asian and Latin American economies. If there is a global small-cap rally, it likely will catch fire here first. This is one area of the market that is not extended when so much of everything else is.

Chasing stocks higher that have already had stellar year-to-date gains can be hazardous to one’s portfolio. For many hundreds of big-cap and mid-cap leading stocks, the easy money has been made, at least for the intermediate term. Such is definitely not the case for the small-cap world of equities. If the Russell does break out to the upside by the year’s end, it will have the potential to outperform the other major averages over a much shorter period of time.

The Russell 2000 Index needs to clear 2,360 on big volume to break free of its current nine-month trading range. If so, there’s excellent potential to ring up some fat holiday season profits.