A Bear Market Bounce or the Pause That Refreshes?

It was the first session where there were no genuine attempts by investors to buy the intra-day dip, but it was also a day where $2.3 trillion in equity-linked options expired. Some argue this removes a layer of support for the market underneath, and the S&P hit up against its downward-sloping 200-day moving average, which prompted technical selling. 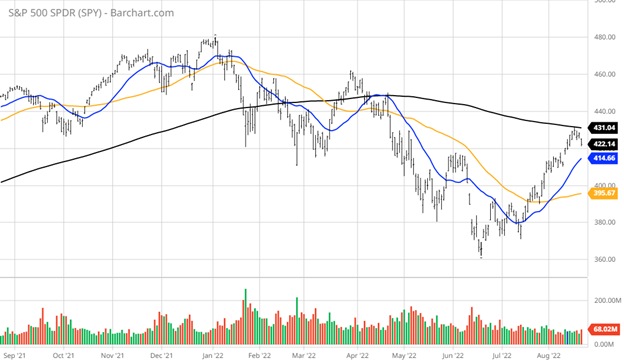 Scores of analysts are waving red flags that this bear market rally has run its course and to look out below. But a broad look under the hood of this decisive move up for stocks off the June low reveals some strong underpinnings that suggest any forthcoming pullback that extends last week’s market decline will be well-contained.

Several leading semiconductor and semiconductor-equipment manufacturers reported better-than-forecast sales and earnings while also providing bullish guidance for the third quarter and the balance of 2023. It was thought by some high-profile Wall Street analysts that the chip sector cycle was topping out, as companies double ordered and the end demand from automakers, industrial producers and consumer-device makers would hit the wall in the current quarter.

Predictions of retail sales crashing due to inflationary pressures have not materialized. The latest retail sales report released Aug. 17 showed consumer spending persisted in July across most discretionary categories, aided presumably by some relief in falling gas prices. Excluding autos, retail sales were up 0.4% for July with online shopping and building materials for remodeling leading the way.

Second-quarter earnings season did not collapse in the face of a multi-year high for the dollar, rising labor costs and soaring energy prices. According to FactSet Earnings Insight, 75% of S&P 500 companies reported a positive EPS surprise and 70% reported a positive revenue surprise. For Q3, only 42 S&P 500 companies have issued negative guidance and 30 S&P companies have issued positive EPS guidance.

Looking ahead, analysts expect earnings growth of 5.8% for Q3 2022 and 6.1% for Q4 2022. For current year 2022, analysts are predicting earnings growth of 8.9%. Not quite the stuff of recessions, but rather a case for positioning capital in the strongest sectors as any retracement of the rally will likely be a very welcome event by cash-rich investors that missed the rally because of the gloom and doom being voiced by the financial media.

Industrial production for July was up 0.6% and above the 0.3% estimate with capacity utilization surging back up to 80.3%, fueled by strength in automotive assemblies. And weekly jobless claims actually fell to 250,000 from the 266,000 consensus estimate, underscoring the resilient labor market and demand for skilled workers that is more than offsetting layoffs from those businesses that benefitted greatly from COVID-19-related products and services.

What has frustrated investors most is that the market never provided the textbook capitulation “whoosh” lower that is supposed to define a true bottom. In fact, fear of such an event is dissipating with each week the market firms up and investor sentiment moves from real fear to one of being more neutral.

There’s no question this newfound confidence could be derailed just as easily as it surfaced six weeks ago, but investors expect another rate hike in September, the housing market to cool further — as it should following a torrid rally — and Fed officials to talk tough this week at meetings in Jackson Hole, Wyoming. So, it’s hard to identify some major bearish catalyst that could throw the market a left hook that it doesn’t already see coming.

Upward pressure on wages, coupled with relatively stable economic data, undergirds the notion that the Fed will have to keep raising short-term rates to counter rising core inflation in professional services that includes rent, transportation, medical care, cars, recreation, clothing and education. While there has been some relief in gasoline and food prices, professional services prices that make up core inflation remain hot.

The Fed Funds Rate is currently 2.25-2.50%, with most bank transactions taking place at 2.33%, as of last week. Based on the hawkish statements by various Fed officials in just the past few days, there is now a 59% probability for a 50-basis point hike and a 41% probability of a 75-basis point hike at the Sept. 21 Federal Open Market Committee (FOMC) meeting.

Quantitative tightening to the tune of $95 billion per month will be somewhat offset by Congress approving more stimulus to “help” the economy. The Fed concluded quantitative easing (QE) back in March that has a six-to-nine month lag effect before it is fully absorbed in the economy, and the same can be said about QT. The big question is how well the market will manage this transition. So far, it has responded better than most anyone expected.

The business of the Fed’s policy and trend of domestic inflation far supersedes other factors that are thought to be serious market risks. And frankly, the market has shown, at least for now, that there is not much attention being paid to the Ukraine war, the energy crisis in Europe, a possible Lehman-style credit event in China’s property market or the 20% crash in the value of the Japanese yen. These and other external volatile situations get a lot of airtime, but no one on the floor of the NYSE seems to care.

Friday’s price action was very sloppy and, up until then, it hasn’t paid to fight the tape, but with the Fed on deck, and the technicals presenting some fresh headwinds, the debate about whether this was a bear market rally or just a pause that refreshes, the current uptrend will likely be answered by Labor Day. Stay tuned.

I’m excited to announce that I’ll be speaking at the W3BX conference Oct. 10-13 in Las Vegas. Join some of the biggest names in the industry, including my colleagues Jim Woods and Jon Johnson, along with our publisher Roger Michalski to learn more about investing in blockchain, cryptos, NFTs, Metaverse, Mining and all things Web Three.

The Web Three sector is expected to grow from $3.2 billion to $81.5 billion by 2030. The more you know about it, the more potential money you can make from this explosion.

Click here now to learn more about the conference and be sure to enter the code “EAGLE” when you register to save 20%. I’ll see you in Vegas!