Big Gains Are in Store for Infrastructure Stocks

Most investors that pay any attention to technical analysis agree that the market is overbought in terms of the major averages. Thus, I suspect that there will be a period of consolidation over the next two weeks, with the rally resuming itself after the Thanksgiving holiday weekend. 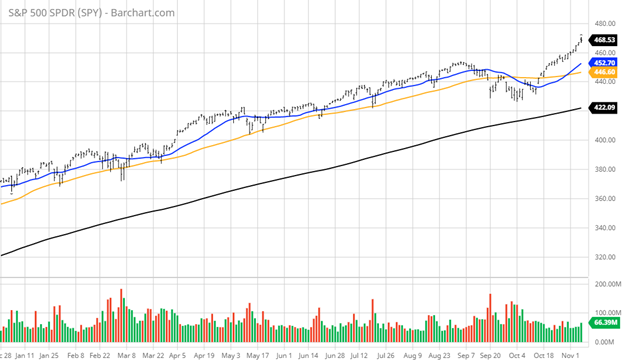 This would be a very healthy development for the primary bull trend, and this week’s inflation data will sway investor sentiment one way or the other. There will be some heated debate as to whether Fed Chair Jerome Powell’s soothing commentary last week will carry the day when the inflation day is dissected. Seeing the yield on the 10-year Treasury fall to 1.45% following such a strong October labor report, which included upward revisions for August and September, was very counterintuitive — a real head-scratcher.

After the market closed, the House finally passed the $1.2 trillion bipartisan infrastructure bill, which might keep the market elevated and frustrate those cash-rich investors that are looking for a meaningful 3-5% correction. They had planned to put their money to work in what is the most seasonally strong time of the year for the stock market’s performance. It’s probably a good bet that materials, metals, transportation and industrial stocks will experience some rising fund flows this week, with a new spigot of government spending on the way.

Passing an infrastructure deal is about 30 years overdue, with thousands of structures in a state of disrepair. The question of whether this piece of legislation was necessary isn’t really up for debate. However, making sure the money is spent wisely and intelligently requires strong stewardship. No more Solyndra scandals please!

The breakout of some of the targeted spending is summarized as follows: 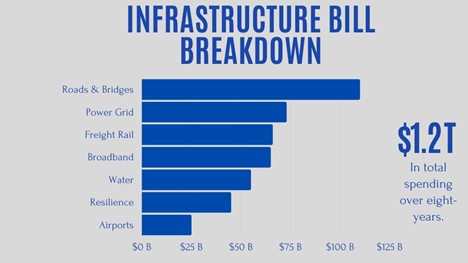 As of last week, there are a great many stocks belonging to companies in the steel, concrete, aggregates, iron ore, copper, nickel, remediation, engineering, renewable grid construction, clean water, rail car manufacturing, paving, earth moving, crane and heavy equipment sectors that are nowhere near being technically overbought. There are a handful that are trading at new highs, but the larger majority have vastly underperformed growth stocks, especially tech stocks.

As long as the bidding process for project spending is above ground and transparent, then there is a lot of good that will come of this effort. My concern is that there is always a large layer of political gladhanding that infects a well-intentioned piece of government spending, and I suspect that there will be plenty of corporate favoritism in the mix (as has historically been the case). Some things don’t ever seem to change — especially with politics.

The infrastructure initiative in the United States could light a fire of similar spending efforts in other developed and developing nations, creating higher demand for commodities that support the construction sector. To this point, it wouldn’t be a surprise if these infrastructure sectors outperformed in the next leg of the bull market. If environmental, social and governance (ESG) agendas are going to be achieved on a grand scale, it will only happen with the support and full involvement of the kinds of companies noted above.

As to the $1.75 trillion social spending package, it was determined last week that the Congressional Budget Office (CBO) must weigh in on how it will impact the larger federal debt, which is now approaching $30 trillion. It remains very unclear as to how it will get paid for, as there is a good deal of pushback on higher corporate, individual and estate taxes. But leave no doubt, taxes are going up in one form or another, because that’s the only way the CBO will back this agenda.