A Big Risk For the Market Emerges in 2021

Industry analysts are predicting a consensus S&P 500 closing price of 4000.08, up 10.9% from today, in the next 12 months due to new all-time highs for the major averages, delivery of COVID-19 vaccines to front-line workers starting this week, more legal wins for the Biden transition team and vigorous, easy-money Fed policy, according to FactSet.

More importantly, the market is broadening out in a manner that looks like there is real traction for many areas that are now providing many themes heading into 2021.

“We’re already seeing the earliest move out of U.S. mega caps into essentially everything else,” Simplify Asset Management’s CEO Paul Kim said in an interview. “Emerging markets, international developed markets, small-caps, to some extent value. The question is, how much of a trend is it, or is it just a short-term reversion to the mean? If it’s really a trend we could see the market drive much higher as previously unloved segments get some attention from investors.” 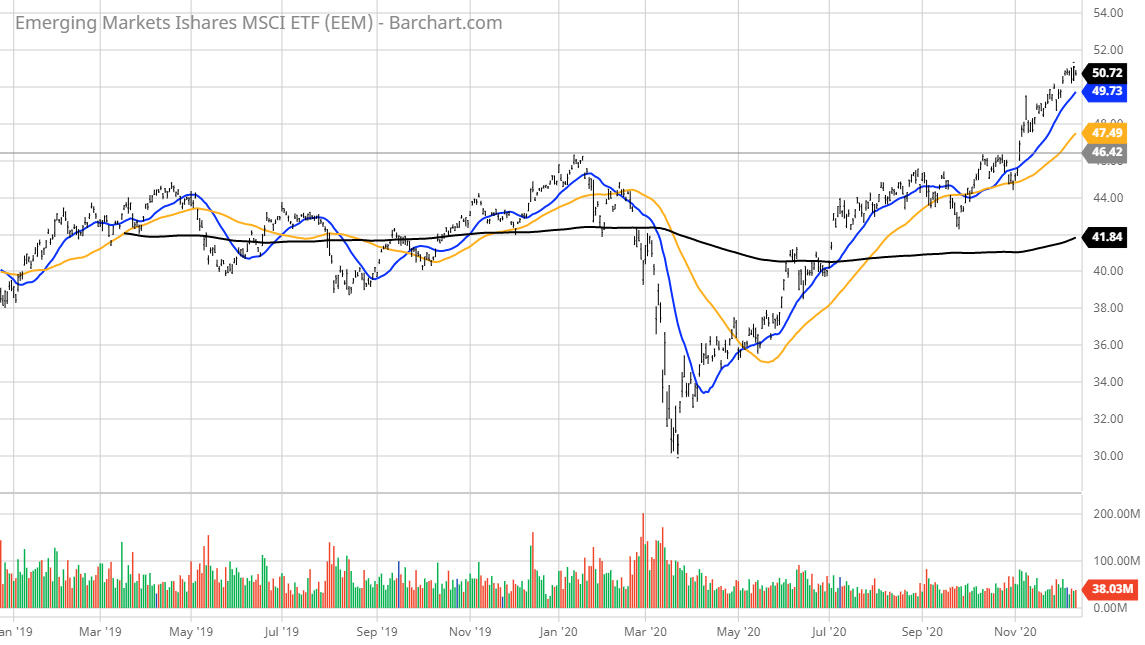 Rising optimism about a recovery in the labor markets and corporate earnings are driving bullish sentiment even as the Main Street economy struggles across many lines of business while Congress has not advanced a stimulus bill.

Hey, Congress had no problem acting quickly to pass a short-term stop-gap spending bill to keep parts of the government from shutting down as of midnight last Friday. Congressional leaders also beat back efforts to attach measures over military policy, block lawmakers’ pay during a budgetary impasse and the offer of a new round of tax rebate checks to households as a result of the COVID-19 pandemic.

While members of Congress took care of their own paychecks, tens of thousands of businesses are closing permanently this winter because the cavalry never showed up in time. Forcing people to not work and then not backstopping those who were affected is a wholesale crime on the part of our elected officials.

And it gets worse, the emergency Centers for Disease Control and Prevention (CDC) order, which went into nationwide effect on Sept. 4, temporarily prohibits new and previously filed evictions from occurring in an effort to prevent further transmission of the coronavirus, expires on Jan. 1.

An estimated 11 to 13 million renters are at risk of eviction, according to Stout, an investment bank and global advisory firm. It predicts there could be as many as 6.4 million potential eviction filings by January 1, 2021, if the CDC moratorium is lifted. Playing politics and delaying funding while businesses shutter, weekly jobless claims increase and people lose their dwellings is unconscionable. But, it’s happening.

Maybe this week, Congress will get it right and pass the $908 billion relief package while the CDC extends the eviction moratorium for another 60-90 days. It’s a two-edged sword as landlords who have not received rent payments for the past four months are super challenged with regard to paying the mortgages on their rental properties. A lot can and should happen in the next three weeks.

Beyond these Main Street issues, it is customary for Wall Street to solicit professional market participants in a query about what potential risks lie ahead that could undo the primary uptrend that seems to have a Teflon-like resistance to any and all bad news. 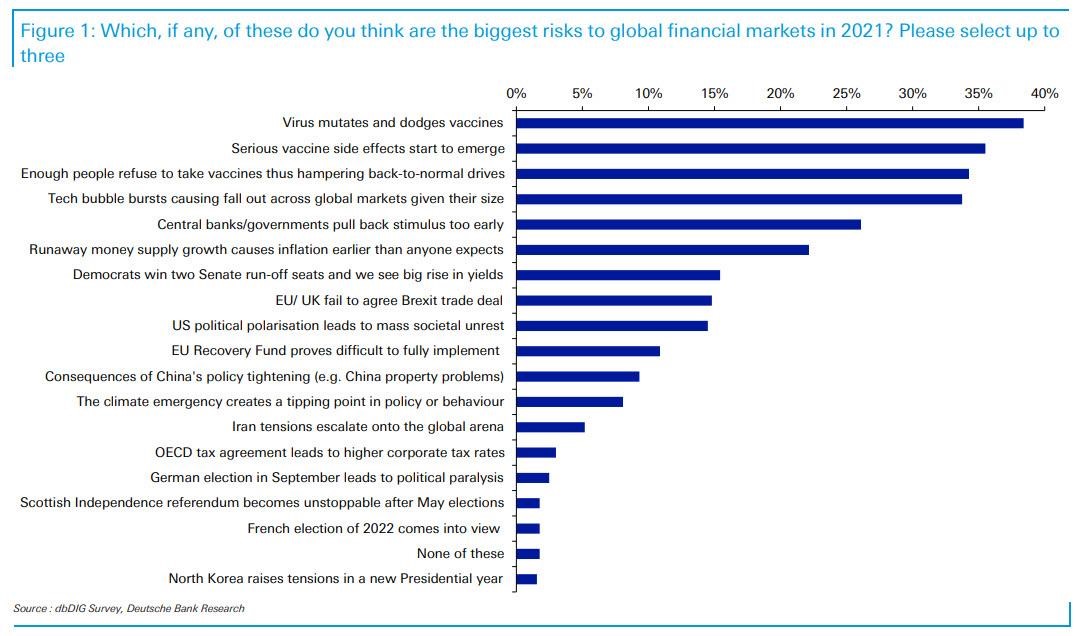 I find it interesting that that the top three concerns are COVID-19 related. Considering the powerful rally within the epicenter stocks (airlines, hotels, casinos, restaurants, theme parks, sporting venues, music venues, etc.) and that the massive distribution of the vaccine begins this week, there seems to be a bit of a disconnect here.

The one risk that catches my attention sits in the sixth spot — runaway money supply growth causes inflation earlier than anyone expects. The current thinking is that, as long as rates and bond yields remain at zero to 1% for sovereign bonds of investment-grade developed nations, central banks can print money in unlimited amounts.

The Fed, European Central Bank, Bank of Japan and People’s Bank of China have all expressed and exuded extreme confidence in the policy statements about their abilities to maintain quantitative easing (QE) at their current levels until their mandates are achieved. It’s this kind of glowing confidence in such aggressive monetary policy with literally no historical benchmarks that should be viewed with some caution.

The chart of the 10-year Treasury note below shows the yield testing resistance at 1.0%, where, if breached, it will likely trigger automated selling, given that artificial intelligence-driven trading platforms around the globe are wired to act when technical levels are exceeded in either an upward or a downward direction.

We see buy programs kick in for the stock market time and time again when technical levels are cleared. The same holds true for the bond, commodity and currency markets as well. The machines react when certain levels are breached, and 10-year Treasuries taking out the 1.0% level opens the way for a move to 1.5%, which, historically, is still dirt cheap. However, such a move will likely be disruptive to equity markets on a short-term basis.

Equity markets have historically advanced in a rising-rate market because of implied economic prosperity. But at no time in history is the amount of debt that is created addressed. Now, world debt, which is at $280 trillion, is about $130 trillion greater than it was during the global financial crisis of 2008-2009, according to calculations based on International Money Fund figures.

Maturities average about five years, meaning that $50-$60 trillion needs to get rolled every year. This, at least in theory, pushes central bank balance sheets to their max capacity.

The conventional thinking is that the Fed and global central banks can’t let rates rise as the cost to carry notes would mushroom and asset prices would decline. This would risk a dangerous drop in coverage between the total pool of global liquidity available and world debt loads. It seems that this is the elephant in the room that no one wants to talk about.