With the month of May already getting plenty of scrutiny as to whether investors should “sell and go away,” it seems pretty clear to me, based on how well a number of fluid factors are playing out, that the S&P is ripe for advancing another 10% higher from its current level of 4,200.

Sure, a 5% pullback to 4,000 is quite possible and more likely probable in that the narrative of the past week was to sell the earnings news, regardless of blowout numbers crossing the tape. Even Amazon.com (AMZN) finished in the red after hitting fresh record highs, despite crushing analysts’ consensus first-quarter estimates and issuing above-consensus revenue guidance for Q2.

Heading into May, the current year-to-date (YTD) returns are solid, with small caps leading the way among the major indexes.

It was widely broadcast that traders and investors were looking to book profits on upward moves in companies that reported big-time earnings beats. In many cases, that is how most of the leading stocks traded. Stocks gapped higher at the open on first-quarter reports posted after the previous night’s close or in the pre-market the day of, and then selling pressure showed up in nearly every case.

It has been the pattern of the past three weeks, ever since the big banks reported the week of April 12. Initially, profit-taking hit the banks, and now they are hitting new highs. 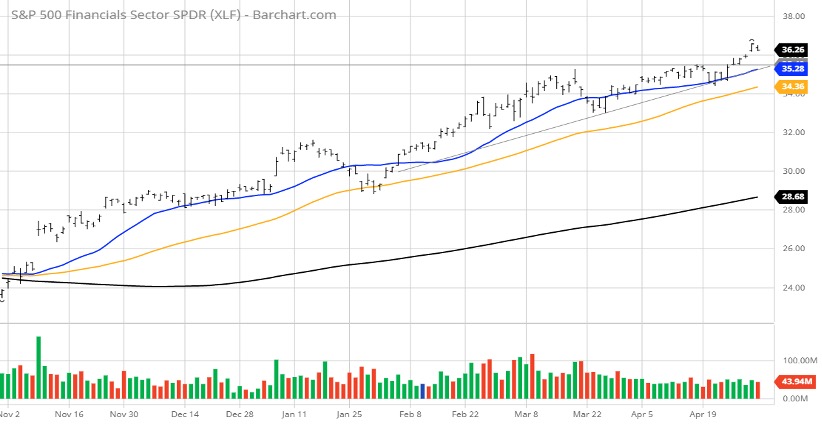 The current two-week consolidation trend follows a five-week stretch in which the S&P 500 gained roughly 8% leading into earnings season. Thus, with the peak growth narrative and sideways activity in mind, investors presumably felt uneasy about buying in front of a potential pullback. When the gap higher moves didn’t hold, this triggered widespread knee-jerk algorithm-related selling.

The main point of contention at present is whether this market landscape is in a pause that refreshes the primary bull trend or whether May could be a month where stocks correct more than a garden-variety 5% pullback. The relatively disappointing price action fed into the “peak growth” narrative, which says the market will find it harder to keep rallying when growth rates for the economy and earnings might moderate in the second half of the year following the monster year-over-year comparisons in Q1 that will surely be just as impressive, if not more so, in Q2.

But before getting too much into the weeds about the “narrative,” looking at the data argues well for the “pause that will refresh” camp. The U.S. economy is driven by consumer spending, accounting for 70% of gross domestic product (GDP). The final April reading for the University of Michigan Index of Consumer Sentiment increased to 88.3 (consensus 87.0) from the preliminary reading of 84.9.

The final reading for March was 84.9. The key takeaway from the report is the finding that an all-time record number of consumers expect the unemployment rate to decline in the year ahead, which is an important view as it relates to spending potential. This is pretty huge in light of the new stimulus proposals being advanced by the Biden administration, where the $1.9 trillion COVID-19 Relief Bill, the $2 trillion American Jobs Plan and the $1.8 trillion American Families Plan are either active or being advanced.

This $5.7 trillion in new spending being promoted pairs up with the Fed’s latest policy statement, reiterating that it will not change its monetary policies until “substantial further progress” is made toward achieving maximum employment and price stability. At this point, Fed Chair Powell says it is “not time yet” to begin tapering asset purchases, meaning the so-called Fed “put” — relying on the U.S. central bank to sustain the economy and financial markets — still appears in place for the balance of 2021.

As a third catalyst for another 10% higher move for the market, analysts expect double-digit-percentage earnings growth for the remaining three quarters of 2021. Overall, 60% of the companies in the S&P 500 have reported actual results for Q1 2021 to date. Of these companies, 86% have reported actual earnings per share (EPS) above estimates, which is above the five-year average of 74%.

If 86% is the final percentage for the quarter, it will mark the highest percentage of S&P 500 companies reporting a positive EPS surprise since FactSet began tracking this metric in 2008. In aggregate, companies are reporting earnings that are 22.8% above the estimates, which is also above the five-year average of 6.9%.

For those that want some technical assurance, the six-month chart of the SPY shows the index breaking out above its channel trendline. We easily could see the market chop around for the next month, but a rising 50-day moving average (orange) should provide solid support at 4,000 if the market does violate the 20-day moving average at 4,140. 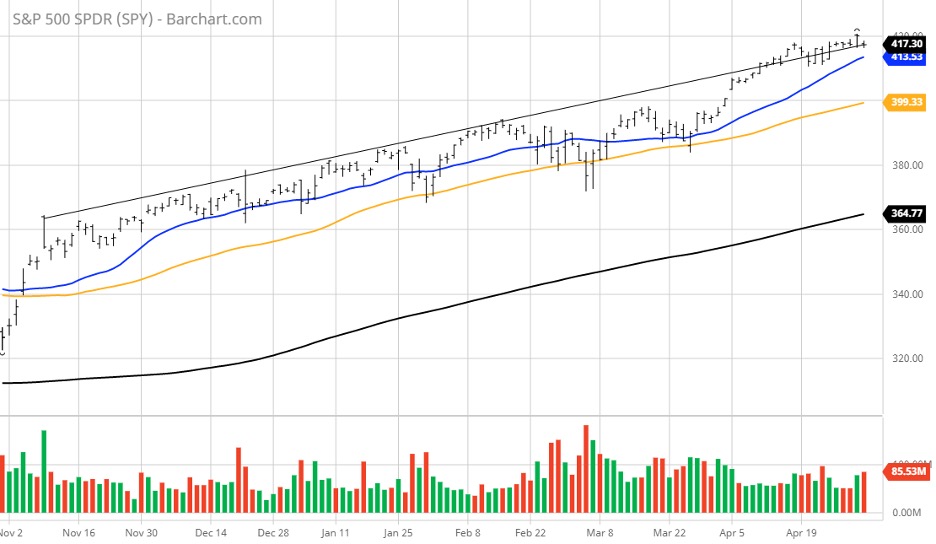 Within the debate regarding the market’s near-term outlook, the Goldilocks catalyst will come with how future corporate taxes are structured. It is likely that after all the Super PACs weigh in, the new corporate income tax rate likely will be somewhere near 25%. Reuters interviewed more than a dozen corporate and White House officials engaged in the infrastructure push. Most expect the White House and business groups to compromise on a 25% corporate tax rate — a level neither side would have chosen, but both can accept.

If so, the stock market likely will receive this news well. U.S. Senator Joe Manchin, a Democrat from West Virginia, whose support is crucial to any bill passing in the 50-50 Senate, said he could support a rate of 25%. I don’t think the market gives two shakes about whether individuals making over $1 million per year have to pay more in capital gains taxes. The big story here is seeing the corporate tax reset at a rate below 28%.

I am looking for the narrative to quickly shift from “selling the news” to “buying the dip” as the tax debate takes on a more definitive tone. This is what the market doesn’t know. If the tax hit to corporations is negotiated at a lower level than what is currently being proposed, then I agree with Credit Suisse that the S&P 500 trading at 4,600 seems reasonable by the end of the year.