Currency crisis could mark a market bottom, especially if the Fed wavers from its current aggressive stance on continuing to rachet up rates to fight inflation.

This was almost the case in the United Kingdom before the Bank of England restarted quantitative easing (QE) to save the 30-year Gilt from a violent sell off. The Bank of Japan (BOJ) took action to support its currency by stepping into the market to buy yen for the first time since 1998, followed by the purchase of roughly 550 billion yen ($3.8 billion) in five- and 10-year Japanese notes.

“The market was expecting some intervention at some point, given the increasing verbal interventions we have been hearing over the past few weeks,” said Stuart Cole, head macroeconomist at Equiti Capital in London. “But currency interventions are rarely successful, and I expect today’s move will only provide a temporary reprieve (for the yen).”

The move came hours after the BOJ’s decision to maintain super-low interest rates to support the country’s fragile economic recovery, bucking a global tide of monetary tightening by central banks fighting to rein in soaring inflation. As of 2022, Japan’s national debt is estimated to be in excess of $12.2 trillion, representing 266% of gross domestic product (GDP), the highest of any developed country.

The latest intervention by the BOJ has failed to stem the continued selling pressure in the yen, which printed a new 20-year low against the dollar last Friday. 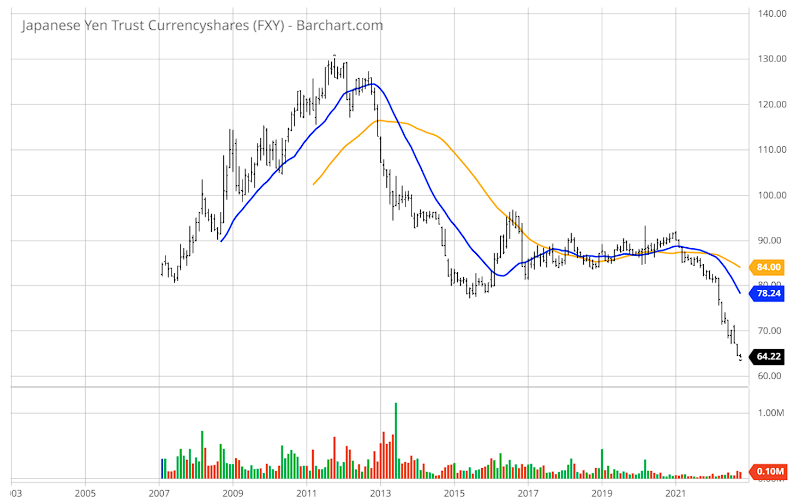 In similar fashion, the Bank of England’s attempt to stave off a run on its long-term bond and the pound sterling provided only temporary relief and it has resumed its downward trend against the greenback. 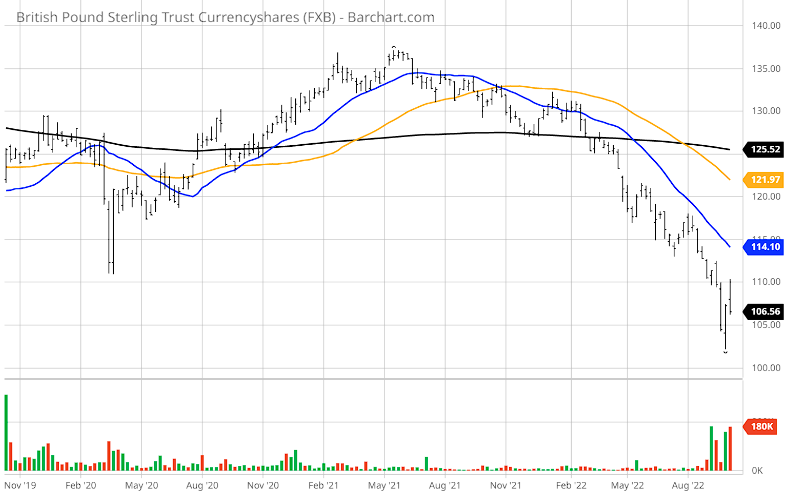 The 1,500-point rally in the Dow early last week was tied to profit taking in the dollar index (DXY) that summarily found support along its 20-day moving average (blue) and is back on track to challenge its recent high. 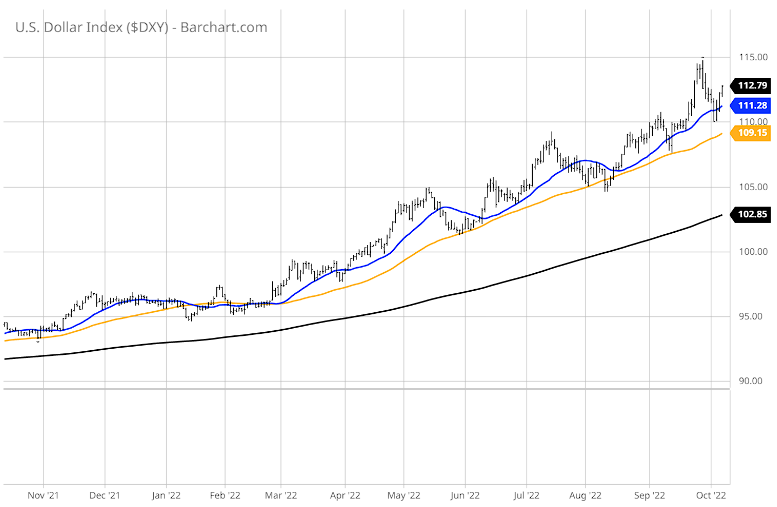 As long as the Federal Reserve is going to keep selling $95 billion in Treasuries and mortgage-backed securities every month while leading the charge on higher short-term rates, the selling pressure on the yen, pound, euro and krona will probably not subside until something breaks. That something will likely come in the form of a major currency crisis above what is already underway. Just to give some perspective:

As of 2022, the worldwide forex market is worth $2.409 quadrillion, with $6.6 trillion on average traded each day on foreign exchange markets. This is much higher than indicated by a previous analysis by the Bank for International Settlements (BIS) in 2016, when it was valued at $1.934 quadrillion.

The forex market is the largest financial market in the world in terms of trading volume, liquidity and value, according to the Bank for International Settlements. Unlike other markets such as equities, the forex industry is the only financial market with 24/7 availability. Not surprisingly, spot forex is the most popular asset class, with $2 trillion worth of spot transactions traded daily in foreign exchange markets. After spot FX, the instruments with the largest daily turnover are:

Forming the largest financial market in the world, forex market participants are mainly financial institutions such as hedge funds, investment managers and multinational corporations, as well as commercial, investment and central banks. Retail forex trading only accounts for a mere 5.5% of the entire foreign exchange market globally.

The forex market is the largest financial market in the world and is 30 times larger than all the U.S. stock markets combined. Daily volume in the forex markets is actually bigger than stock and bond markets worldwide. The great majority of forex trading is done with extreme margin. An accredited forex trader can buy $100,000 with just $1,000.

It has been many years since the Fed intervened heavily in the foreign exchange markets to support either the dollar or other major currencies. But given the momentum of the deterioration of the major currencies against the dollar, it would not be out of the realm of possibility for the Fed to pause its quantitative tightening while also participating in forex markets to help stabilize currencies and both bond and equity markets alike.

Forex markets are also open 24 hours a day, seven days a week. Since they never close, if something systemic starts gaining traction overnight in forex markets within the major currencies, there can be serious dislocation in global financial markets suddenly when they open for trading in the morning.

The amount of forex trading has swelled by 29% since 2016 with all the newly minted money created by the quantitative easing of central banks around the globe. With the extreme use of leverage in a market that never closes, it begs the question as to whether this is where a series of major institutions could face liquidity issues stemming from having too much exposure to too many crumbling currencies and/or are holding too much debt, like the Japanese central bank, where intervention is not working.

Events outside the United States could cause the Fed to pivot on its quantitative tightening, since the foreign currency and U.S dollar charts shown above seem to signal a climax of sorts is in the making.