Does Robinhood’s Valuation Signal Dot-Com Risk All Over Again?

Investors around the globe that depend on yield for pension distributions and general living expenses are finding it more difficult than ever to identify assets with dependable, low-beta features that pay decent dividends.

With the latest Consumer Price Index (CPI) data showing annual inflation running at 5.4%, one needs to make 15% just to net 9.6% in inflation-adjusted return on equity. Tell that to your broker and see what kind of response you get.

Well, for some of us who grew up in the days of Michael Milliken and Drexel Burnham Lambert (I’m dating myself), pitching 9-15% yields to prospective clients was an everyday practice. I remember that when I was working as a broker at Bear Stearns, KKR put out an RJR Nabisco convertible bond with a 13.5% coupon. At the time, RJR was a private holding of KKR that was soon to go public.

Selling this paper was like shooting fish in a barrel. But so was selling the Solomon Brothers Nikkei Puts when the Nikkei was trading at 40,000 and the Japanese were buying up Times Square and Pebble Beach. By the way, both trades worked out fabulously, and I organized a party on a 110-foot yacht for the entire trading floor on San Francisco Bay. Yes, those were the days — 1990 to be exact.

Ace Greenberg was Bear’s CEO, arguably the best bridge player in the world and held no quarter with people who had “woke feelings” about things that got in the way of business. He was famous for telling an audience of 110 pinstripe-suit-wearing employees on our trading floor that “stocks are like toilet paper — use them and throw them away.” Sounds simple.

At the time, Larry Kudlow was the senior in-house economist at Bear, and would show up from time to time when the market closed at 1:00 pm Pacific Time to pontificate on his view of the investing landscape, lighting up a Dunhill with his Cartier lighter in a strict no smoking building. Yeah, right. The guy was great to listen to then, and still is today.

When Ace stepped down, Jimmie Cain took the helm and to everyone’s surprise, lost his focus, let his MBS minions puff up his ego with the promise of ginormous profits and, summarily, the house of Bear Stearns came crashing down with the entire mortgage crisis. Thankfully, I was long gone from the company before that trap-door situation unfolded.

To say I’m lucky, blessed or both is an understatement. After leaving Bear, I was employed at Lehman Brothers for a time before that house burned up as well. Oddly enough, two of my favorite movies are “The Big Short” and “Margin Call.” 1999 through 2007 was a wild time in the securities business as risk was thrown to the curb for yield and profit, with no regard for if or when the rug would get pulled out from under everything.

Oh, how history has a way of repeating itself, and in this day and age, it seems the time for a repeat of foolish investing behavior happens in a more abbreviated fashion. Take for instance the rise of Cathie Wood and the Ark Funds. From a marketing standpoint, it’s a phenomenal story, having seen total assets under management (AUM) rise to more than $50 billion in the span of just over five years. Investors that bought in early during 2018-2020, like those that got in the MBS programs in 2000-2001, are making out pretty huge. For those that bought in during late 2020 and after, they haven’t made a dime and the S&P has rallied from 3,600 to 4,400 since last December. 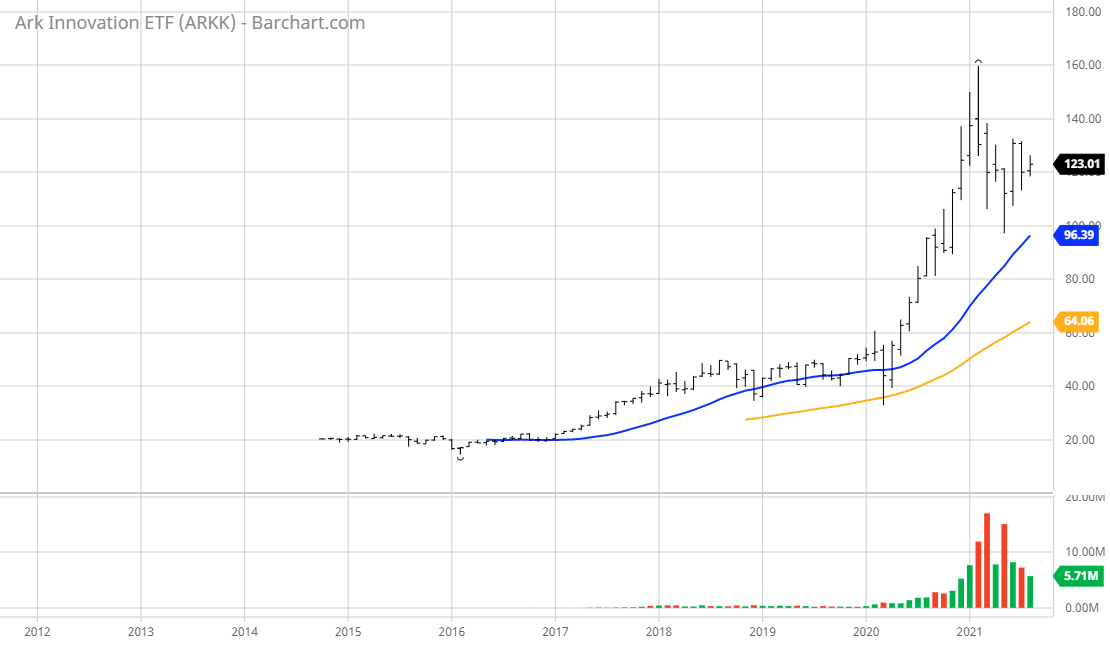 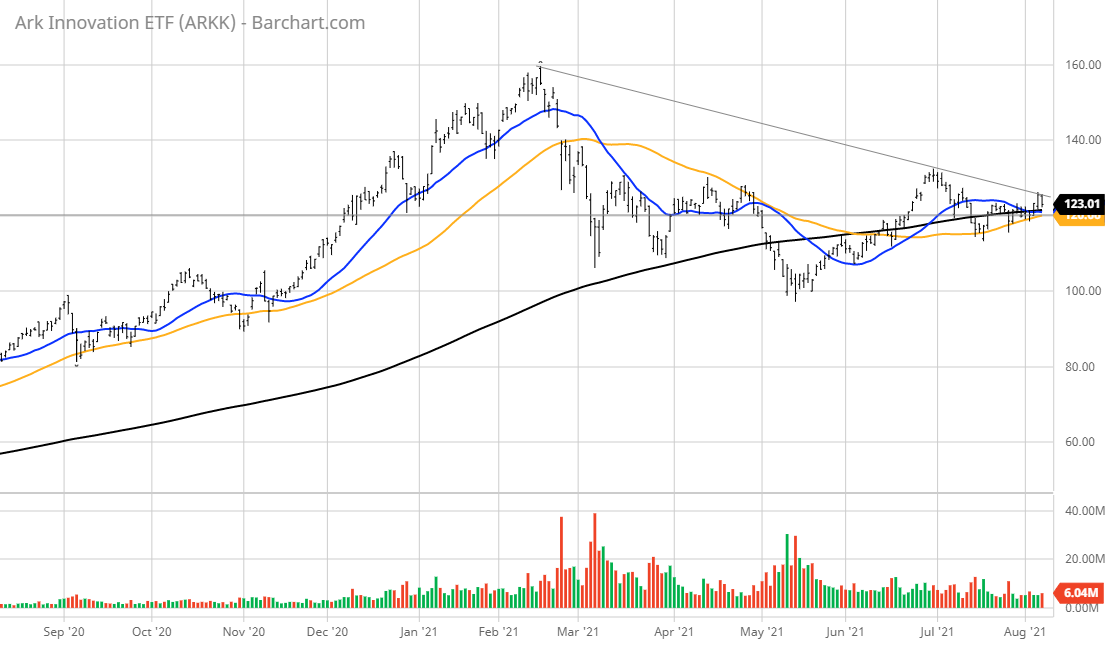 Here’s the problem I see where history might rear up and repeat itself. The flagship Ark Innovation ETF (ARKK) is trading at dot-com valuations. Anytime a stock or fund has a price-to-earnings (P/E) ratio of negative 65x that reflects huge losses on revenues, it should be a cause for concern, especially when the top 10 holdings account for 51.78% of total assets. There is no room for escape from the inevitable massive multiple contraction if the market corrects more than the garden variety 3-5% witnessed during the past 16 months. 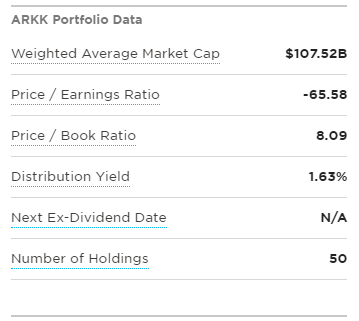 If the stock market continues its path higher without a major correction, then shares of ARKK might well hold the 200-day moving average (MA) and push up through the resistance line noted in the chart above. But here is where I have to throw the caution flag. The ARK Innovation Fund has bought more than 3.6 million shares of Robinhood Markets Inc. (HOOD) as of last Friday. This is a meme stock. The company may never make money and, for fiduciaries, may be a liability issue if the client account holder’s profile isn’t tagged as crazy.

With almost 98 million shares set to hit the market from selling shareholders in the first tranche of venture money moving to exit, and the stock trading in a 40-point range in the past week, one must wonder if this is investing or gambling dot-com style. I would tend to think the latter is more accurate. The whole meme, Reddit, Wall Street Bets, Diamond Hands movement smacks very big of 1999, and for the sake of the 20 million account holders at Robinhood, I hope it doesn’t end badly, but I’m afraid it will.

I have my own ideas about what, how and when the market will correct, and it usually comes when the great majority of investors don’t see it coming. Investing in stocks with rising sales and no earnings is fraught with risk, and that’s what’s in fashion for a great portion of the investing public. If the market does endure a 10-20% correction, I predict shares of ARKK will drop to $65, implying a nearly 50% decline. I truly hope I’m wrong, but having been through a few periods where P/E ratios get redefined as “metrics” and other useful phrases to rationalize sky-high valuations, I think the “comeuppance” of judgment day is a matter of when and not if.