Certainly, it was not forecast by the Wall Street analyst community, which was very guarded in its year-end outlook, up until the front end of November. This was when the Fed reiterated its mandate to provide unlimited support to the credit markets. Late in 2020, investors priced in a trillion-dollar stimulus package that Congress ultimately would deliver, along with news that a COVID-19 vaccine with positive test results would be forthcoming.

Admittedly, the highest-profile stock market stories around the globe were, and still are, centered on U.S. companies, except for a handful of Chinese electronic vehicle (EV) stocks. But as awesome a year as it has been for the FAANG stocks of Facebook (NASDAQ:FB), Amazon.com (NASDAQ:AMZN), Apple Inc. (NASDAQ:AAPL), Netflix, Inc. (NASDAQ:NFLX) and Google’s parent Alphabet (NASDAQ:GOOG), the MAGA stocks of Microsoft (NASDAQ:MSFT), Amazon, Google and Apple, cloud kings, semiconductors, sizzling unicorn initial public offerings (IPOs) and a massive merger and acquisition (M&A) wave, there is also some serious bullish rotation occurring with regard to international stocks that haven’t been worthy of cocktail party discussion for years.

Take the Japanese market for instance, which is trading upward of 27,500. These are levels that have not been seen since 1997. We’re talking about a country with negative population growth, where over one-third of its citizens are above the age of 60. 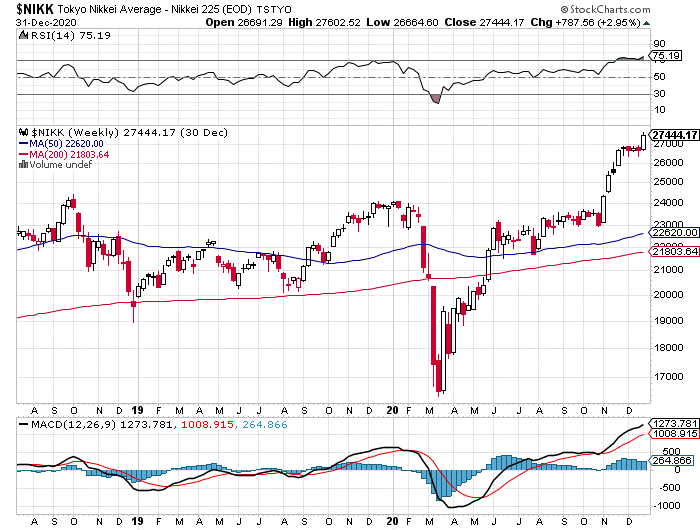 Its debt-to-gross-domestic-product (GDP) ratio is 236%, the highest among Fitch-rated sovereigns, with the Bank of Japan being the largest buyer and owner of its debt. Its 10-year sovereign pays 0.00%, and yet, the yen rallied by single-digit percentages during 2020. But, it is also believed that, since almost all Japanese government debt is owned by its central bank, and the Japanese financial system, it won’t default on itself. So, the quantitative easing (QE) goes on and on.

Granted, Japan is home to cutting-edge technology and has a major presence in all manners of heavy industry exports, but the demographics, soaring debt-to-GDP ratio and the fact that its own central bank has to put all that debt on its own books is a unique set of circumstances. For now, I think the question of “do deficits matter?” has been answered.

The current school of thought is that the Fed, Bank of Japan (BOJ), People’s Bank of China (PBOC), European Central Bank (ECB) and emerging market central banks can keep this rising velocity of money going indefinitely, with the understanding that if their debt isn’t bought in the open market, it will be absorbed on their own balance sheets. It seems that global equity markets are supporting this economic scenario.

It also assumes that global short-term interest rates will be near zero for the next two to four years. This is theoretically enough time to restore surplus tax revenues and balance budgets due to a roaring global economy that would enable the winding down of quantitative easing (QE) and the eventual tightening of fiscal policy. (Imagine the sound of a needle scratching a vinyl record.) Yeah, right… I wouldn’t bet on it.

So, if the Nikkei can rally under these conditions, then it’s hard to bet against Japan or Europe, or for that matter, global stock markets. This is because investors are embracing the growing view that central bank QE has moved from a temporary stop-gap tool to a permanent feature in monetary policy. This would seem to explain a lot of the reason why markets continue to rally, even though there are seemingly rich valuations.

Here’s an outlier: How are investors to understand why Turkey’s stock market, the BIST National 100, hit a fresh all-time high this past week of 1,482, when the Turkish Central Bank raised its key lending rate from 15.0% to 17% last week to slow down inflation and protect its currency. The nation’s central bank holds some 75.6 billion lira ($11.14 billion) of government debt as of June, up from 19 billion lira at the end of 2019, a 297% increase. 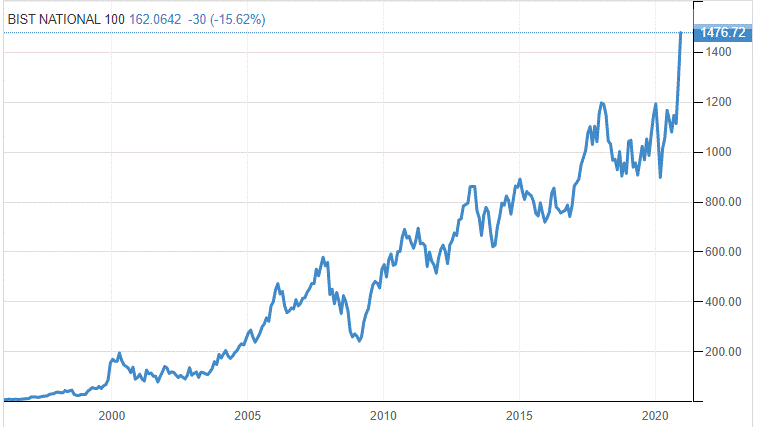 And, while this is a microcosm of a market, compared to a developed nation many times its size, it’s amazing to see what is happening that defies most of the economic theory that was taught in business schools leading up to 2008. Such monetary policy hampered the stock markets of the past, but apparently not today. And so, rather than try to get angry with the system at large, or staying in cash, investors are running with it.

As I’ve quoted before, and what is being repeated in many, if not every, investment policy meeting around the world: “It will keep working until it doesn’t.” If this QE-fueled march to higher highs is to continue in 2021, there is a multi-year breakout occurring in the emerging market indexes that could provide a place for real outperformance to lie ahead.

Emerging markets have some strong tailwinds working for them. Most have gross domestic product (GDP) growth tied to the export of commodities. Developed countries have devalued their currencies, resulting in stronger purchasing power from emerging economies. And the central banks of emerging markets have spent decades trying to prove that they are good stewards of their money supply, because of the volatility of commodity prices.

Hard and soft commodity prices are trending solidly higher following years of depressed prices. The Commodity Research Bureau (CRB) Index has rallied 59% since the March low but still is way off of the levels that have been seen during the past 15 years. To say there is room to run is a gross understatement. The CRB index comprises a basket of 19 commodities, with 39% allocated to energy contracts, 41% to agriculture, 7% to precious metals and 13% to industrial metals. 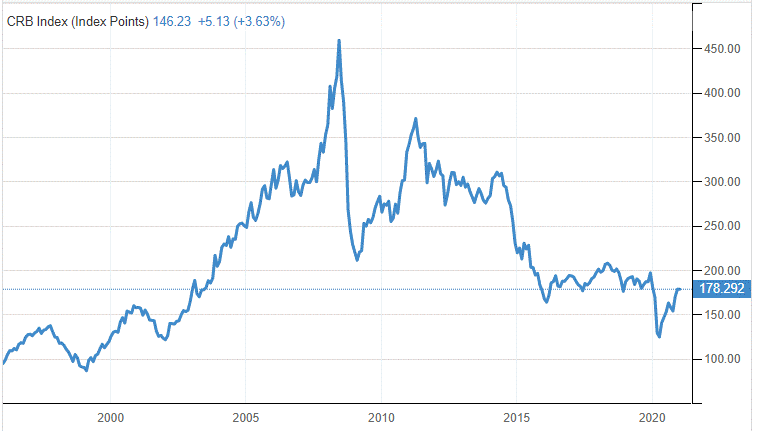 The commercial, professional and wealthy investor financial world is so awash with cash, credit and confidence that waves of fund flows should move into inflation-sensitive assets from pure diversification into non-correlating assets to lower portfolio beta. This is where emerging markets should shine, if this initial rally starts to feed on itself.

The iShares MSCI Emerging Markets ETF (EEM) is the most widely held and heavily traded ETF that tracks the underlying index. From the 25-year chart below, EEM looks to be in a position to challenge its 2007 high, but maybe not before a well-deserved 10-15% pullback occurs first. This would have EEM testing its key support levels and provide what could be a timely entry point. 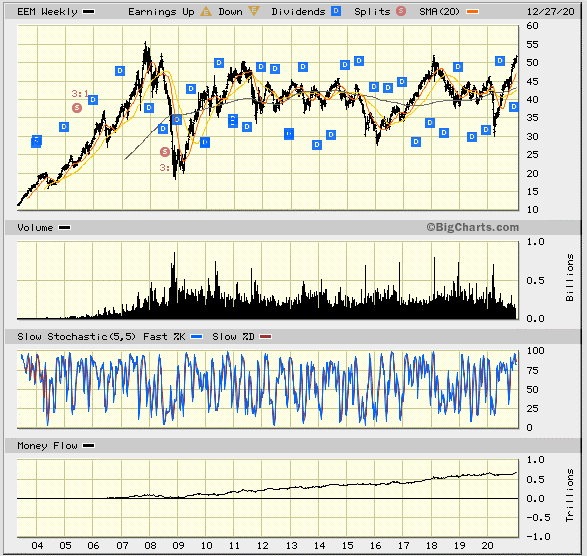 This index has been building a base for 13 years, with each correction being more shallow than the previous one. Consider adding some international exposure to portfolios in 2021. It just might steal the show by this time next year.