There is no way to sugarcoat the current problem rising inflation is having on consumers, corporate earnings and the stock market.

This past week, several blue-chip companies that reported fourth-quarter results cited rising costs for margin pressure on profits. Some companies are more effective at passing on those costs, but not if you are running a labor-intensive business like a hospital, where hourly wages for skilled workers are moving sharply higher.

With so many components to the economy tied to short-term interest rates (wages, rents, loans, etc.), the inflation rate running at a 7.0% annual clip and climbing, the Fed has recognized just how far behind the curve it truly is and how complicit its leaders were in letting the situation worsen to what it is now. The market must contend with whether the Fed will overshoot on tamping down inflation that compromises future economic growth prospects.

At the post-Federal Open Market Committee (FOMC) press conference, Fed Chair Powell acknowledged there is further upside risk, and most of the voting and non-voting members of the Fed agree. Powell went on to state that he’d be inclined to raise his own estimate of 2022 core personal consumption expenditure (PCE) inflation by a few tenths.

According to the Consumer Price Index, inflation is running at 7.0%. The PCE Price Index, which is the Fed’s preferred inflation gauge, is up 5.7% year over year in November. Hence, Powell’s remark about adding a few tenths of a percent to the PCE number since we are now in February is probably quite accurate when the December and January data are released. 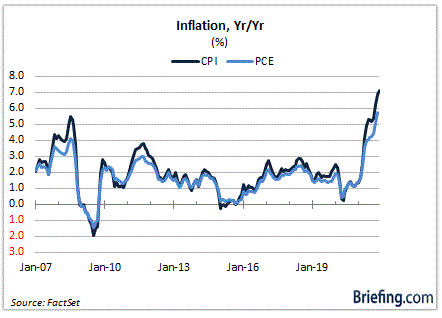 The spread between the 2-year (1.18%) and 10-year (1.79%) Treasuries is now just 61 basis points versus 78 basis points when the year started, implying the market is becoming more worried about a real slowdown later this year. This narrowing of the spread is weighing as much on market sentiment as is the volatility and inflation data. 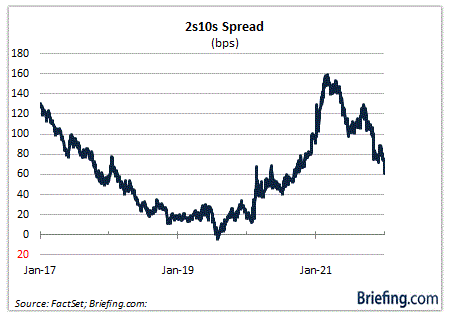 The unsettling Fed policy changes suggest the rate of inflation is going to keep rising before it plateaus and begins to settle lower. Thus, the investment proposition for investors seeking income that potentially can keep pace with inflation and not lose principal becomes a narrower path to obtain inflation-friendly yields.

The most rewarding sector of the past few months has been energy in all its forms: exploration, production, refining, storage and pipeline transfer.

As of January, the Energy Information Agency (EIA) put forth its 2022 forecast stating that demand will soak up available supply, likely keeping oil prices above $70/bbl. unless OPEC raises output. To date, OPEC has not changed its schedule, and the Biden administration continues to not address the energy crisis that is prevalent and only getting worse.

Not completing the Keystone Pipeline, opening Federal lands for drilling, overregulating on permitting of existing fields or releasing more than a four-day supply from the Strategic Oil Reserve are stoking inflation with no response other than to ask OPEC to step up production. Common sense has apparently been abandoned in Washington. 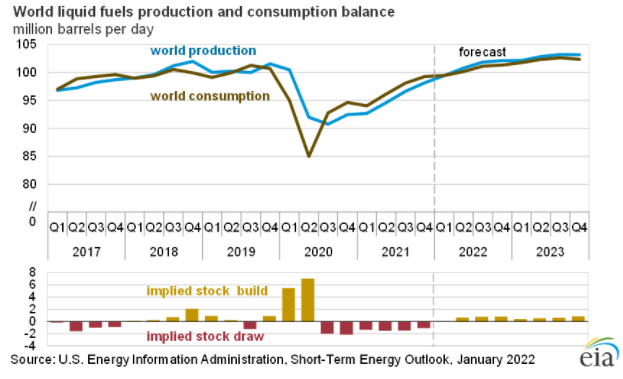 In any event, it stands to reason that energy is in a secular bull market for now, one that all the king’s horses and all the king’s men in the renewable energy space will in no way begin to satisfy with respect to the global demand for fuel over the next three to five years. A new report has found that electric vehicles (EVs) made up just 4% of American sales in 2021, compared with 9% in China and 14% of new sales in Europe. (Source: www.theguardian.com)

With 96% of vehicles in the United States powered by internal combustion engines, a government unmoved by high gas prices, a stifled energy industry that can’t provide sufficient fuel to meet demand and an EV market priced for only the top 5% of income earners, the rally in energy and energy income stocks is good to go.

These are five exchange-traded funds (ETFs) offer excellent yields, whose underlying components are raising dividends and are seeing their shares trading at 52-week highs.

For now, these and other ETFs and blue-chip energy stocks are a nice place to find yield and upside appreciation. Until there is data to argue otherwise, 2022 looks like another very bullish year for the oil patch.