Trying to anticipate the next big turn for market sectors and stocks that are lagging is like trying to safely pass a slower car on a two-lane road in a thick fog.

There are inherent risks such as what investors are encountering with the fits and starts of so many false breakouts and bullish reactions to headlines only to result in disappointment. A case in point would be the semiconductor sector.

Following a bullish rally off the mid-March low of $240 and reclaiming its 200-day moving average, the VanEck Semiconductor ETF (SMH) gave back nearly half its gains in three days. The market ignored the fact that the shortage of neon gas and palladium that are crucial to the manufacture of chips has not gone away – not even close.

“Some 45% to 54% of the world’s semiconductor-grade neon, critical for the lasers used to make chips, comes from two Ukrainian companies, Ingas and Cryoin, according to Reuters calculations using figures from the companies and market research firm Techcet.” It is being reported that inventories at the largest chipmakers are limited to a one-to-two-month supply.

Saturday’s reports of peace talks advancing comes after the Wall Street Journal ran an article outlining China’s stern and uncooperative position to intervening, claiming the United States and the European Union provoked the conflict by attempting to bring Ukraine into NATO to put Article 5 military potential on Russia’s border. Based on this premise, it seems only logical that Putin and the Kremlin will settle for nothing less than for control of the eastern half of Ukraine and recognition of Crimea as part of Russia.

This week will be pivotal as to how this all plays out. It is a painful setback for global trade no matter how one tries to size it up. China siding with Russia will only complicate matters with future trade with China. A key reason is Russia’s role as one of five permanent members of the 15-nation UN Security Council. The other four permanent members are the United States, China, France and the United Kingdom. However, a breakthrough in peace talks will resurrect the chip sector and give global markets a much-needed boost.

This is not a constructive chart for what lies ahead in terms of Fed policy. There is speculation after this latest release that that the Fed will raise the Fed Funds Rate by 50 basis points at the May, June and July Federal Open Market Committee (FOMC) meetings, given the strong wage and jobs gains reported this past week. Workers are generating rising income, but are still losing spending power month-over-month. The Fed is now in hurry-up mode to close the gap.

So, I still get my weekend edition of Investor’s Business Daily delivered to my house because I enjoy reading a physical newspaper with a cup of coffee Saturday morning when I can steer clear of the computer screens for a brief time. Call it old school, but I’m not alone. And when I come to the IBD 50, which lists the hottest stocks in the market for the week, holding the top spots are fertilizer, specialty metals, shipping, energy, cutting-edge medical and pharma, private equity and software. Those charts are up and to the right, unlike so many other former leading stocks.

Before going off and bottom-fishing great companies with horrific charts, experience would suggest allowing inflation to play itself out, stay with what is working and not try to be clever in anticipating peak inflation even though the most recent Fed policy statement contends the rate of inflation will be under 3% by year-end. We’ve just entered the second quarter, and inflation is still on the rise.

As long as those in power are coddling the globalists at the United Nations, rattling the saber with Russia and China, living in denial about the real state of the economy where the labor participation rate is near historic lows and daring to offer a new 20% levy on unrealized gains when the yield curve is inverted, I’m not sure where to begin pontificating. 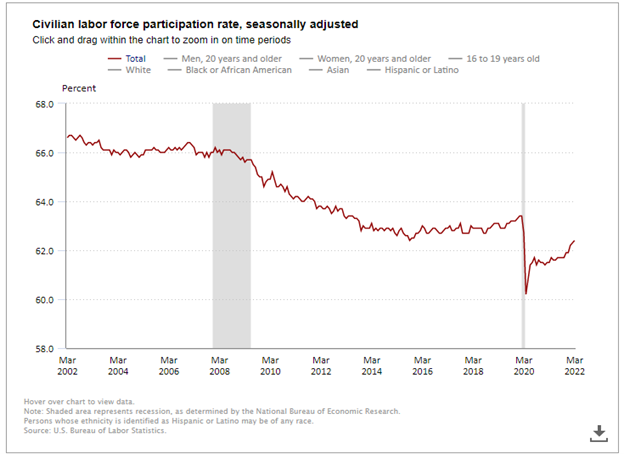 Investing involves identifying stresses in the market that are both bullish and bearish. At present, inflationary and supply chain constraint tailwinds are generating huge profits for those companies that are seeing incredible demand, can pass through higher costs, charge more for their products and services and crush Wall Street sales and earnings estimates. This will likely be very evident in the upcoming earnings season.

With that said, while wage inflation is sticky, commodity inflation is very volatile and last week most prices of soft and hard commodities pulled back. This development deserves very close attention as to whether it is just consolidation or peak cycle conditions in the making. I tend to think the pullback is temporary and we have to keep an agile and open mind to all of these moving parts of the investing landscape, as there are many, and they can change rapidly with little notice.