The shouts from many corners of the market about it being grossly overbought can be heard from a long way off.

It is like investors keep adding risk capital to the market via F.O.M.O. (fear of missing out) pressure. At the same time, they are keeping one hand on the trigger to lighten up or hedge in a hurry. The temptation to press one’s position in a market, where bullish momentum is so prevalent, is high. But, as long as some of the most fundamental indicators are intact, then buying dips remains the path to profits, at least for now.

One cornerstone technical indicator that continues to favor the bull trend is how the advance/decline (A/D) line for the S&P 500 has continued to maintain a very positive chart pattern. At present, there is no disparity between the A/D line and the market’s advance, unlike previous charts I have posted that show wide disparities between forecasted profits and where the S&P currently trades. Last week saw a new high for the A/D line that coincides with a new all-time high for the S&P. 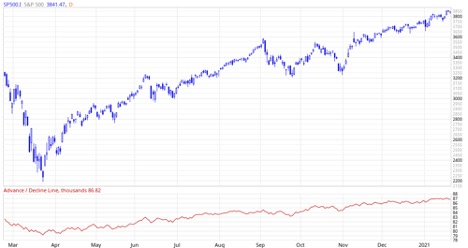 The overriding tenor of the market is one where Treasury Secretary Janet Yellen is telling Congress to “act big”, which only overlays the Fed’s dual mandate of doing whatever it takes to bring the unemployment rate back down to under 5% while lifting the core inflation rate back up to 2%. It is music to the market’s ears when the president, the Fed, the Treasury and the controlling party in Congress want ballooning deficit spending.

At Janet Yellen’s confirmation hearing last week, much of the time was spent discussing how much is too much. “To avoid doing what we need to do now to address the pandemic and the economic damage that it’s causing would likely leave us in a worse place economically and with respect to our debt situation than doing what’s necessary,” Yellen said.

Within Yellen’s confirmation hearing testimony, she laid out a vision of a more proactive Treasury that would act aggressively to reduce economic inequality, fight climate change and counter China’s unfair trade and subsidy practices. Since when was the Treasury in the climate change business? I think we didn’t get the memo on that one.

Taxes on corporations and the wealthy will eventually need to rise to help finance Biden’s ambitious plans for investing in infrastructure, research and development and for worker training to improve the U.S. economy’s competitiveness, she told members of the Senate Finance Committee. Investors know this. The market knows this and has likely priced it in, to some large extent.

What isn’t priced in is the rub of introducing new progressive tax policies. She raised the eyebrows of some senators and Wall Street when she said that the Treasury would consider the possibility of taxing unrealized capital gains — through a “mark-to-market” mechanism — as well as other approaches to boost revenues. (Reuters — January 19, 2021)

So, if one is expected to pay taxes on unrealized gains for 2021, does the government provide a refund for unrealized losses in 2022? I don’t think so. This line of thinking is so far off the reservation, it’s just hard to imagine it getting to the Congressional committee, but desperate governments in dire financial condition will do desperate things to get solvent.

Those “other approaches” are what investors need to be on high alert about. The looming biggie would be the elimination of a “step-up basis” for inherited assets. With estimates of close to $9 trillion in assets being passed on by 2030, and a projected $68 trillion being transferred in the next 30 years, taxing those assets at original cost basis would generate trillions in tax revenue and force heirs to sell family businesses and family farms due to not being able to pay the inheritance taxes.

How about the elimination of the mortgage interest deduction altogether? That’s one way to effectively reduce the price of home prices by about 15-20% overnight while generating hundreds of billions of dollars in new tax revenue. I don’t think it can’t happen. It is exactly what Canada enacted in the mid-1990s.

Could taxes be imposed on individual retirement arrangements (IRAs) and other retirement plans above a certain valuation? That sacred cow might not be so sacred — not if it means “for the good of the nation.” In 2012, the Irish government passed a law that placed a 0.6% levy on assets held in private pensions for four years. The Irish tax on private pensions was made in response to a larger financial crisis and the need to increase government revenues.

Ireland isn’t the only country in recent history to seize private investments. Hungary, Argentina and France have all overhauled their private and public pension plans in recent years, in some cases, seizing them in their entirety, and in others, taxing them to oblivion. (source: cashmoneylife.com)

Overall, assets in U.S. retirement plans have been growing at a smart clip and projected to reach $28.9 trillion by 2020, up from $22.2 trillion in 2016, said Jessica Sclafani, director, retirement practice, for research firm Cerulli Associates, speaking at the 2018 SVIA Spring Seminar in Orlando, Florida. 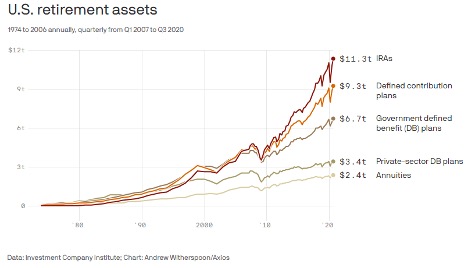 These draconian measures of what could well be future tax policies are not just hearsay but are actively being researched to provide huge future sources of revenue in the event the country doesn’t produce the needed level of prosperity to grow out of the spiraling debt load.

For now, the A/D line is sending a clear message that investors aren’t worried about anything as long as the collective spending spigot is wide open. But when Janet Yellen’s suggestion of taxing unrealized market gains makes its way through Congressional committee, Mr. Market just might take exception to that and “other approaches” to resolving the debt crisis.