Market Rally Has Some High Hurdles To Clear

One of the most exciting races in all of track and field is the 110-meter-high hurdles, a fierce event that requires extreme focus, grit and determination to succeed in clearing all 10 hurdles without hitting one, which can easily compromise victory.

Back in 1981, Renaldo “Skeets” Nehemiah owned the track and field world as the first man to run the 110m hurdles under 13 seconds, clocking a 12.93. As a member of the Virginia Tech University Track & Field team during 1981 (Class of 1982), I had the privilege of meeting Skeets in the infield at an all-conference meet at Florida State University stretching out before the men’s 880-yard relay. 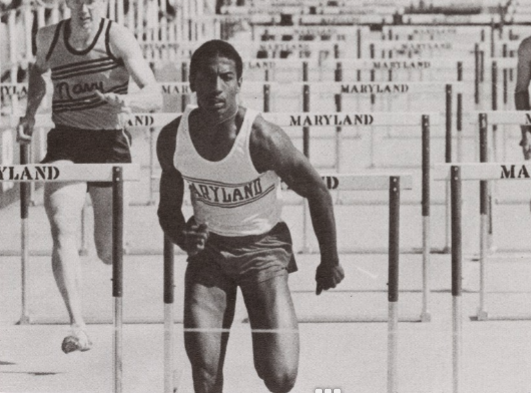 He had already torched the field in the 110 highs and was going to run the anchor leg for the Terrapins in the 880 relay. As I watched him take the baton, it was if his feet never touched the ground. He ran his leg in 19 seconds flat, an unofficial world record time for a 220 split.

It is always fun to share a memory about meeting someone who is very special and very humble, but it also makes for an abstract metaphor by which to compare to what I believe the market faces in the next several weeks ahead — a series of high hurdles to clear before it gets to what could well be the year-end handoff to a record-setting finish. 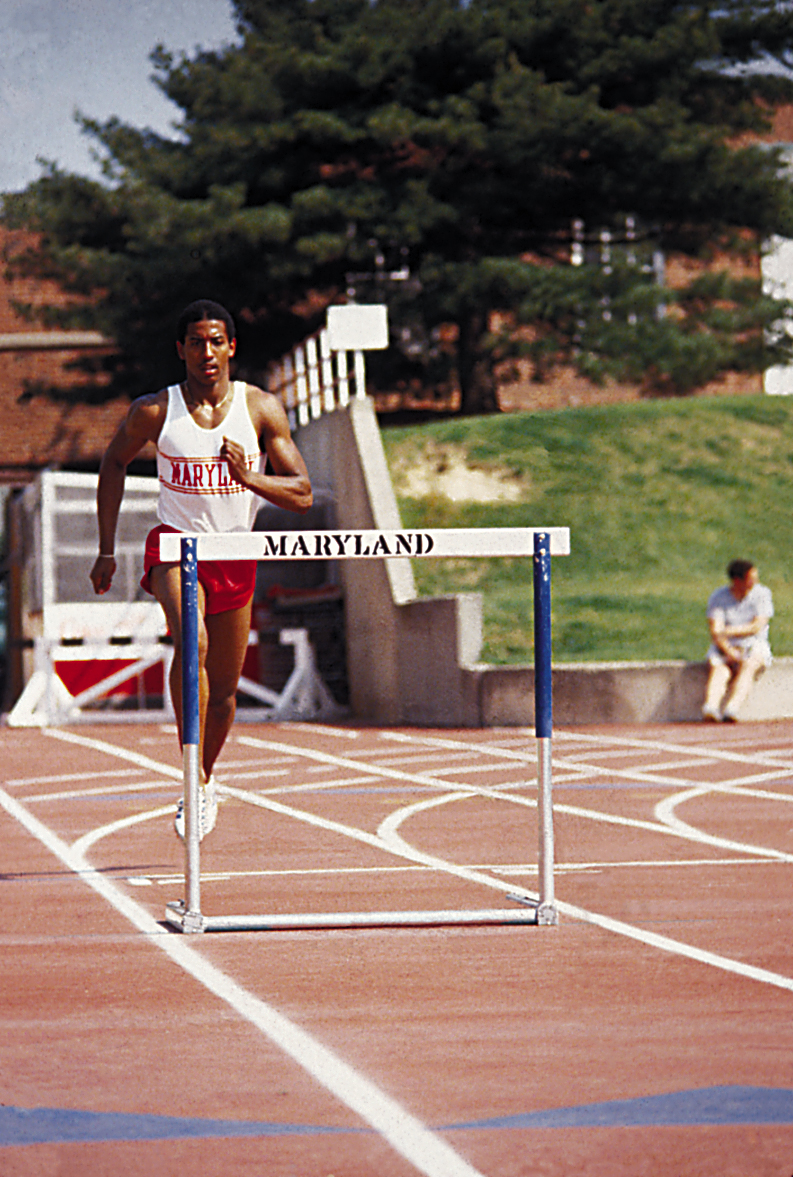 Favored to win the 110-meter hurdles in the 1980 Summer Olympics in Moscow, Renaldo Nehimiah was unable to compete due to a 65-nation boycott of the Games in protest of the host Soviet Union’s invasion of Afghanistan. Image credit to the University of Maryland.

Not only did the market put up a good fight to avoid dipping below its lows in June, it made up a decent portion of year-to-date losses during the month of July. Led by the all-important big-cap technology sector, growth stocks came back into fashion as the expectations of reduced inflation and fewer rate hikes took hold of investor sentiment.

The latest stronger-than-forecast data from the labor market and manufacturing sector has the Atlanta Fed raising its gross domestic product (GDP) estimate to 1.4% from the -1.9% that I posted just a week ago in this column. That’s a notable swing of 3.3% to the good! And, with over 80% of S&P 500 companies having posted second-quarter sales and earnings that exceeded estimates, the market found some good footing upon which to build. 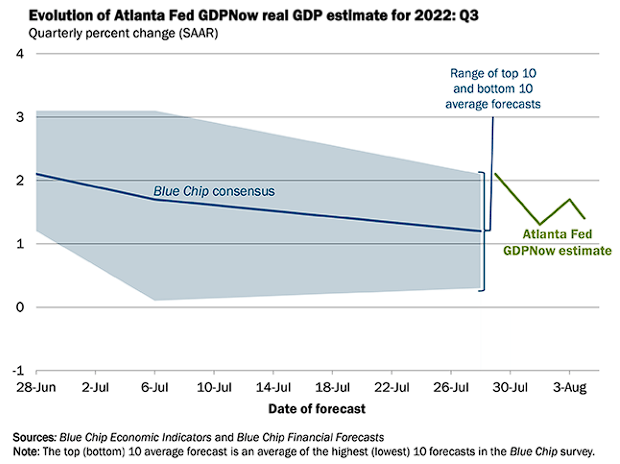 The first hurdle that will heavily impact market sentiment will be when the Consumer Price Index (CPI) and Producer Price Index (PPI) reports for July are released. While food and energy prices have come down, the costs of rent, professional services and skilled and hourly workers have probably increased. The market has been betting heavily of late that inflation has peaked, where any numbers that come in above consensus will take bond yields higher and stock prices lower as expectations of more Fed interest rate hikes will likely hurt investor sentiment. There is an important week ahead.

Investors shouldn’t be complacent about the market’s newfound lovefest with the change in narrative about the economy skirting a recession. There are deep problems in other major economies around the world. While inflationary forces in the United States will likely begin to diminish as the year progresses, the same cannot be said for Europe, which faces stubbornly high prices for natural gas, food and other shortages.

Europe is facing a grim winter of record inflation, if there is no relief in the price of natural gas. Russia has now stated it is slashing the supply of gas through the Nord Stream 1 pipeline to just 20% of capacity to pressure Germany and the European Union (EU) to stand down in their support of Ukraine. Top EU officials say Russia is “blackmailing” Europe and “weaponizing” its gas supplies. Moscow has repeatedly denied the accusations. 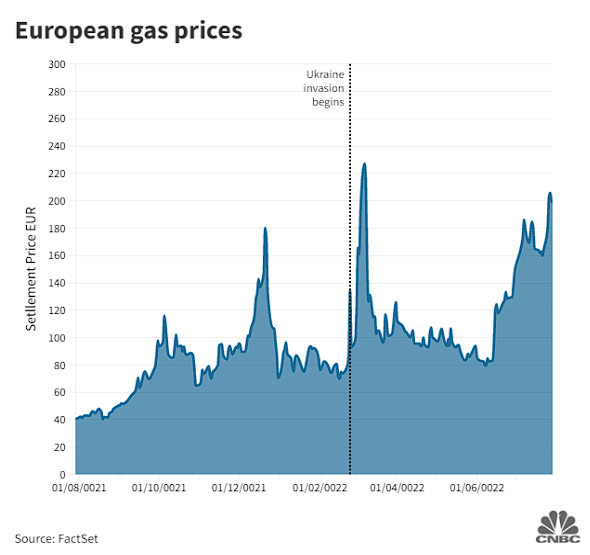 Japan’s economy is the third-largest in the world and faces the same challenges of inflation and a weakening global economy that could pressure its export-dependent economy. Japan is adding an additional $2 trillion to its mountain of debt, now at 230% of GDP. That percentage of debt to GDP is the highest in the world. The Bank of Japan has almost no choice but to keep bond rates low to be able to service debt. But as a result, the yen has lost more than 20% of its value in the past year.

For decades, the yen was considered a safe-haven currency, but now it shows what can happen when a nation’s debt soars to where it compromises the currency in a country that faces an aging society, a declining birthrate, labor shortages and highly restrictive immigration laws. Supply chain snarls and more bouts of COVID-19 only compound a very difficult set of economic conditions. 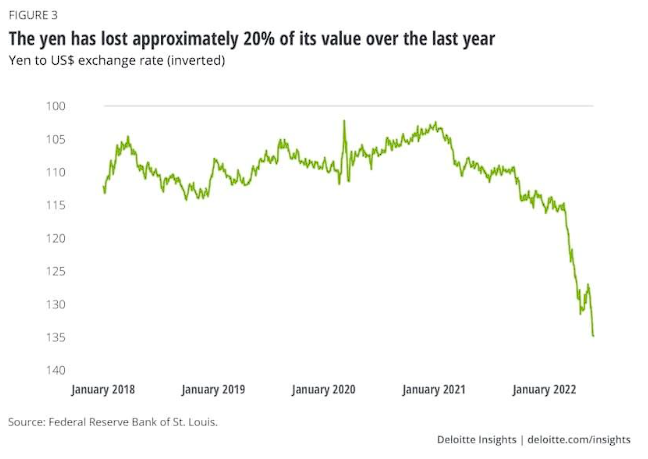 China has its own set of stiff headwinds. Its slumping property market and shadow banking industry are under serious stress, with the government having to orchestrate broad refinancing measures to avoid widespread bankruptcies. The country will be hard pressed to meet its year-end GDP goal of 5.5% if it continues to wage full lockdowns against COVID outbreaks. Data showed the world’s second-largest economy slowed sharply in the second quarter, missing market expectations with just a 0.4% increase from a year earlier.

And capital outflows from Chinese bonds and equities continued for a sixth straight month with the United States threatening to delist major Chinese ADRs due to regulatory and disclosure violations. Tensions with the United States due to its support of Taiwan are also a possible flash point that is keeping capital away from those markets. A view of the China Large-Cap iShares ETF (FXI) shows a very troubling pattern where that market could test the 2008 low, marking a 14-year period of stagnant market conditions. 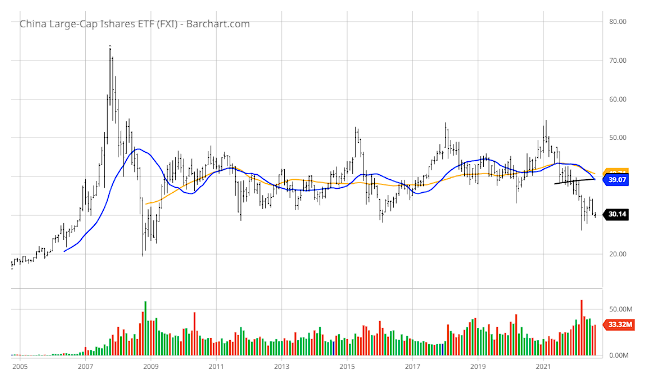 Sadly, Hong Kong, once the shining Asian light where East meets West, has seen its equity market retreat 40% from its 2018 highs after China’s pseudo-takeover. The Hang Seng Index now trades at the same level as in 2007. This week, videos of Chinese tanks on streets to disperse agitators fuming at not being able to withdraw funds from their bank accounts have gone viral as the government now grapples with growing civil unrest. So much for the great China experiment.

And the war in Ukraine only adds further uncertainty to this set of big challenges for the global economy. Because the United States accounts for roughly 25% of total global GDP, it is considered a safe and investible market for now, as economic conditions are stable, while the U.S. dollar and the labor market are strong. This is a big reason capital from around the world is seeking shelter and opportunity in the U.S. bond and equity markets.

There is still an incredible amount of uncertainty with inflation, interest rates, energy prices, commodity prices and geopolitical situations that could flare up at any time. As some of these metrics become more clear in the month ahead, investors will gain much-needed insight into these and other risks that will determine whether the recent gains will hold and build, or whether another retest of some lower level for the market is in order.