The day after Christmas, the Wall Street Journal ran a front-page article in its weekend edition with the headline, “COVID-19 Propelled Business Into The Future — Ready Or Not.”

It stated much of the obvious about how businesses have propelled forward their future plans to digitize operations to gain efficiency, and thus bigger profit margins. Much of the article lays out how the pandemic simply accelerated the inevitable — widespread layoffs with a limited rehiring of veteran laid-off employees. Instead, hiring will devolve to new and younger employees, who are willing to work for considerably less compensation.

The pandemic is triggering a huge reset in the U.S. labor pool. Per the WSJ article, “Nationwide Mutual Insurance Co. illustrates the shift. Shortly after the pandemic hit, Nationwide had 98% of its 28,000 employees working from home. The initial impetus was safety, but chief executive Kirt Walker said it accelerated pre-existing plans to rely on virtual operations. Before the pandemic, roughly 15% of employees worked from home, and the company now plans for half to eventually do so permanently.

Mr. Walker used to hold town halls with employees in the auditorium at the company’s Columbus, Ohio, headquarters, which can hold up to 350 people. Now, he has regular companywide broadcasts attended by thousands of employees. They submit questions and vote on which Mr. Walker should answer using Slido, a live-polling application startup that was just bought by Cisco Systems Inc.

“We looked at major occurrences in the U.S.: The Great Depression, recessions, world wars and what we found is that Americans reacted in two different ways,” Mr. Walker said. “First, they were forced to try new things. Those new things became habits. Two, people became more value-conscious.”

Nationwide is closing 17 offices across the country, keeping four main campuses, reducing its real estate needs by roughly 1.1 million square feet and saving about $100 million, which it says will be used to reduce policyholders’ premiums. Some companies, Mr. Walker said, wrote off 2020 as a lost year. “For us it was an accelerator, and got us closer to some long-term objectives.”

Nationwide is among the great majority of businesses conducting the same fast-forward transformation of producing more goods and services with fewer employees and on-site location workplaces. I previously expected that much of this work-from-anywhere trend for 90% of most corporate workforces would give way to a return to the office or corporate campus, but now I’m seeing more evidence that remote labor is a permanent thing.

My niece works at VMWare Inc. (VMW) in Washington D.C. and was recently informed that her job is now 100% remote. My son, who works at TIAA-CREF, a Fortune 100 financial services organization, was told by supervisors that he doesn’t need to consider working out of the downtown Denver office until next June, at the earliest, after they reconfigure a smaller office presence. My other son works at a mega-sports agency called the Wasserman Media Group, where he hasn’t seen the inside of their Beverly Hills offices since last March and doesn’t see any plan by management for him or his team to return to the office once the pandemic is gone.

This is anecdotal evidence, but I’m fairly sure that the empirical data would back up the notion that corporate business models have leaped forward about five to 10 years ahead of schedule, because the advancements in technology were able to make it so. Sure, teams will physically meet to collaborate on projects in various industries, but here, too, more of this type of work will be done via high-end video conferencing. Like it or not, it generates huge cost savings and pads the bottom line.

Where this new normal will have a huge and long-lasting impact is in federal, state and local government operations, education, primarily at the collegiate level, real estate, law practices, financial services, media, publishing and extensive areas of high-tech, just to name the obvious target sectors. Again, there are too many to list.

The big “so what” in this morphing of the new normal work-from-anywhere model for investors is that, by the third or fourth quarter of 2021, there could be a sharp increase in S&P 500 earnings that shatters current estimates.

I have a strong admiration for the work that Ed Yardeni and his research team compile month after month. It is interesting that Ed’s earnings forecast for 2021 of $170 is only slightly higher than that of broader analyst consensus of $169.18, and his 2022 forecast of $195 is a bit shy of Street estimates of $197.20. Ed tends to be more bullish than the Street, but the lagging affects of the pandemic are probably keeping a lid on his optimism.

Lately, CNBC, Bloomberg and Fox Business have all been trotting out one chief investment officer after another to warn of the overvaluation of the current market trading at a forward price-to-earnings (P/E) ratio of 21.7 times earnings. And that’s true, if the S&P does earn $170 in 2021. But maybe the market suspects that the big year-over-year (Y/Y) momentum in earnings forecasted for Q2 2021 of 43.0% will carry into Q3 and Q4. 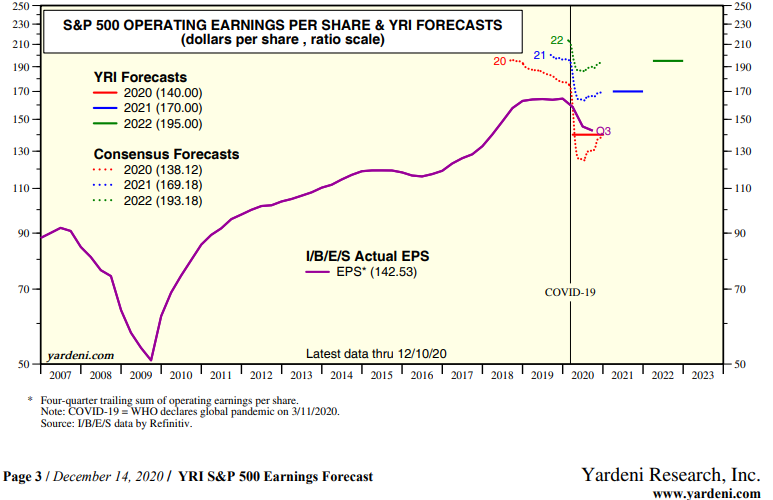 This is just my opinion, but the analyst community has been living in a foxhole for most of 2020 as far as the fact that both the second- and third-quarter results for S&P revenues and earnings have handily exceeded consensus estimates. For the current quarter that just ended and Q1 of 2021, there is guarded optimism about earnings prospects due to the surge in COVID-19 data in terms of the number of cases and deaths, both here and abroad.

I think the analyst community might be underestimating just how much productivity is being generated by the remote workforce against the backdrop of rising commercial office space vacancies. The world has changed, probably permanently, for millions of onetime office-goers.

Technology is cutting out and replacing all the fat at the human level as well as at the physical level. Meanwhile, profits for many, if not most, S&P 500 companies are likely to explode higher in the second half of 2021 as the pandemic is, hopefully, fully eradicated. 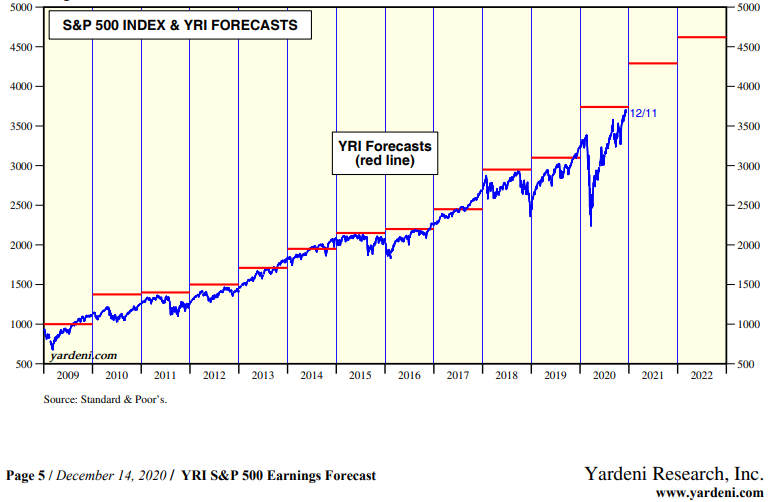 I’m thinking that the stock market is trading on the notion that earnings of $170 forecast for 2021 might be way light of actual final earnings when reported in Q1 2022. Current estimates are based on an aggregate operating profit margin of 11% for 2021 and 12% for 2022. What if profit margins are closer to 13-15% because of new normal efficiencies? Then we can pull forward 2022 earnings estimates to 2021.

Ed has targeted the S&P 500 at around 4,300 for 2021 and roughly 4,650 for 2022. If my hunch is right about S&P 500 companies reporting higher-than-forecast profit margins, then that 4,650 level could be achieved by the end of 2021 to make for a 25% up year for the S&P 500. Given all the attention being voiced about market bubbles about to be burst, isn’t it interesting to see how Teflon-like the market landscape is? Most of Wall Street’s top market analysts got it woefully wrong this year. Who’s to say they can’t get it wrong in 2021?