This is my third piece in a series of columns about the compelling investment thesis that is currently unfolding with regard to getting long in the Russell 2000.

It also will be my last set of thoughts on this topic, because after this week, it’s my view that the train will indeed have left the station. And it’s a non-stop train that likely won’t pull into the next station until it has sped ahead by 40-50%.

That’s both a fundamental and technical forecast. Let’s look at the fundamental side first. The world is awash in liquidity and quantitative easing (QE) is still rapidly expanding. At the most recent Federal Open Market Committee (FOMC) meeting, Fed Chairman Jerome Powell stated the tapering process will involve a $15 billion monthly reduction from the current $120 billion a month the Fed is currently purchasing.

The buying of Treasuries and mortgages to the tune of $105 billion per month in QE is still a huge amount of stimulus, even with the Fed slowly taking its foot off the gas. On the current schedule, the reduction in bond purchases will conclude around July 2022. Fed officials have said they don’t envision rate hikes beginning until tapering is finished, and projections released in September indicate one increase, at most, is coming next year.

But much has happened since September, when the world was on a strong trajectory to rid itself of COVID-19 due to rising vaccination rates and lower trending caseloads, hospitalizations and mortality rates. Within the past few weeks, the number of COVID-19 cases is once again spiking, primarily across Europe, prompting the re-imposition of a national lockdown in Austria and mandatory vaccinations.

The latest wave of COVID-19 cases is hammering Europe, with a number of countries seeing record numbers of daily infections, resulting in the imposing of partial lockdowns and more restrictions on unvaccinated people. In Germany, more than 65,000 new cases were reported, a new daily record, with health officials warning that the true number of cases could be double or triple that number. And both the Netherlands and France are reporting either record new cases or levels not seen since the peak of the pandemic. 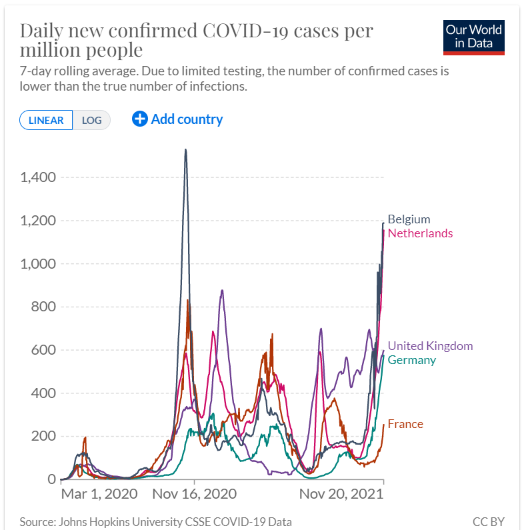 Any plans that the European Central Bank (ECB) might have had about its ideas to taper QE are now on hold, as economic activity is at risk of witnessing a sudden slowdown. It is deja vu all over again in Europe, and this, heading into the winter months, only complicates the matter regarding the transmission of the virus. The obvious fear that is arising out of Europe is the potential impact on the United States at some point in the not-too-distant future, given the loosened travel restrictions.

The point here is that as attractive as Europe might have appeared as a place to which one would allot investment capital to — it is now not so appealing, when the risk of a widespread pause in the reopening of that region has materially increased. Hence, the U.S. market, and specifically those companies whose business models serve the domestic economy, remains the safer haven for more predictable returns — that being small to mid-cap stocks.

Then, there is the bullish move in the dollar that deserves comment. Both gradual tapering and incrementally higher bond yields are driving the value of the dollar higher relative to other major currencies. The dollar index (DXY) formed a formidable double-bottom between January and June, put in a high flag pattern during late September through October and subsequently broke out to the upside in November.

A strong dollar is a major headwind for the profit margins of multi-national corporations, especially those that generate more than 50% of revenues from outside the United States. As the Fed continues to move down the path of nominal tapering and rates creep higher, the path of least resistance for the greenback remains higher. This structural dynamic is also bullish for companies where the majority of business is dollar-based and where goods and services are sold within the U.S. – specifically, small to mid-cap companies.

Lastly, inflation is still a problem, much of it still caused by snarled global supply chains and tight labor markets. Last week, Walmart noted in its earnings release that it and other companies are “managing supply chain issues by rerouting products to less congested ports and extending overnight hours to unload cargo, and that while higher labor costs were adding to expenses, they were being offset by sales growth.” Here, too, a strong dollar means greater buying power when importing raw materials and goods. Once again, this foreign exchange variable skewed to a strong dollar favors the interests of domestic companies serving markets inside the United States — small to mid-cap companies, to be precise.

There are a few ways to play a potentially bullish U.S. small-cap rally using the Russell 2000 Index. The first fund to buy is the iShares Russell 2000 ETF (IWM), as this is the most conventional avenue to get long in the index. More aggressive investors will trade leveraged instruments, like the Direxion Daily Small Cap Bull 3x Shares ETF (TNA), which provide three times the reward, but also three times the risk. For income investors, the Global X Russell 2000 Covered-Call ETF (RYLD) and its lofty 11.30% yield, coupled with a monthly payout, might be of interest. (I have no personal position in IWM, TNA or RYLD). 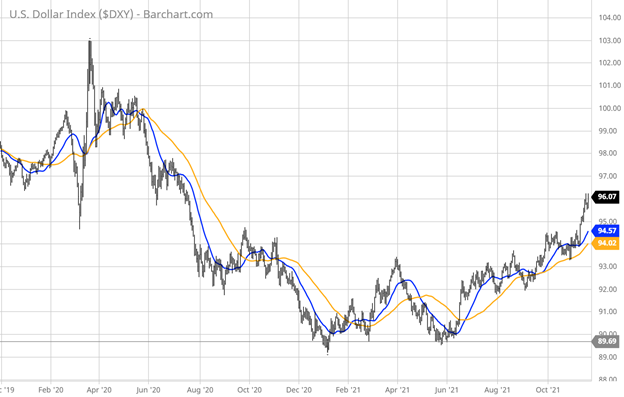 The chart of IWM above is one of the most pristine technical charts investors could hope for in buying an index. Following nine months of consolidation, IWM broke out earlier this month and has back-and-filled 50% of the recent gain. If the charts don’t lie, and normally they don’t, then Christmas could come early for those that take this breakout in the Russell 2000 to heart. Have a wonderful Thanksgiving!