Last week’s price action for the stock market smacked of a rally that had run out of good news to justify rising share prices.

All the heavy-hitting stocks that pack the top quartile of the S&P 500 had posted great numbers, except the house that Bezos built: Amazon.com, Inc. (NASDAQ:AMZN). The Fed beat the drum of quantitative easing (QE) but gave a wink and a nod that, somewhere down the road, a taper here and a taper there might be in order. The Fed’s balance sheet currently stands at $8.2 trillion and is climbing.

Lastly, Congress lined up more than 60 votes that were needed to pass a $550 billion bipartisan infrastructure bill. It tees up President Biden’s $3.5 trillion economic plan. The infrastructure package should pass the Senate by the end of this week, assuming everyone wants to break for the traditional summer August recess that was established in the Senate’s earliest years to allow senators to escape the heat, spend time with family, meet constituents in their home states and catch up on personal affairs.

Going home without an infrastructure package following decades of delay is a political lemon at a time when the country is facing further challenges with the COVID-19 variants. The proposed infrastructure plan includes $110 billion in new spending for roads and bridges, $73 billion of electric grid upgrades, $66 billion for rail and Amtrak and $65 billion for broadband expansion. It also provides $55 billion for clean drinking water and $39 billion for transit.

Spending will commence just as federal unemployment benefits are set to expire on Sept. 6, but the fresh outbreak of COVID-19’s Delta variant might serve as a reason to extend the benefits. Most of the companies that occupy the top tier of each sector of the economy are making vaccinations mandatory. For the business of business, “the show must go on,” regardless of COVID-19. Momentum for vaccine mandates has been building, with President Joe Biden stating last week that all federal employees and on-site contractors must be vaccinated or submit to regular testing and mitigation requirements.

To date, the notion of returning to lockdowns and shut-ins is off the table because the vaccines work, which is the current position of the Biden administration. But according to Reuters, during the last week, the U.S. averaged about 610,020 doses administered each day. At that rate, it will take a further 108 days to administer enough doses for another 10% of the population. This raises some questions about the speed of a highly contagious Delta variant infecting the population versus the time needed to vaccinate those who are willing to receive the needed doses. 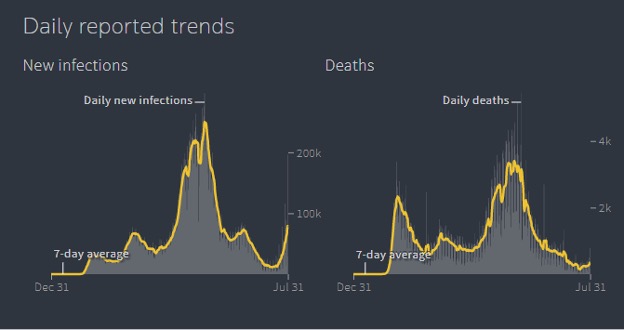 And then there is the rising flight of capital from Hong Kong and China amid the growing crackdowns on businesses and free society. Tensions are increasing in reaction to the new set of security laws. If spurred to action, the United States could respond by invoking sanctions through the Hong Kong Human Rights & Democracy Act that allows America to revoke Hong Kong’s special economic and trading status.

The United States can impose tariffs on China’s products that flow through Hong Kong, and the U.S. Treasury could restrict portfolio flows to and from Hong Kong. Such actions could trigger widespread capital flight as there are no capital restrictions. The increasingly fraying relationship between China and the United States has been largely ignored by the U.S. equity market.

The reason Hong Kong is so vital is that it represents the keyhole to western financial markets. Investors, venture capitalists and businesses that want western dollars have to usually go through Hong Kong to access capital via the western banking connections in Hong Kong. There is a sense that these relationships are at risk, fueling a steep 28% correction in China’s market and a 16% drop in Hong Kong’s market. 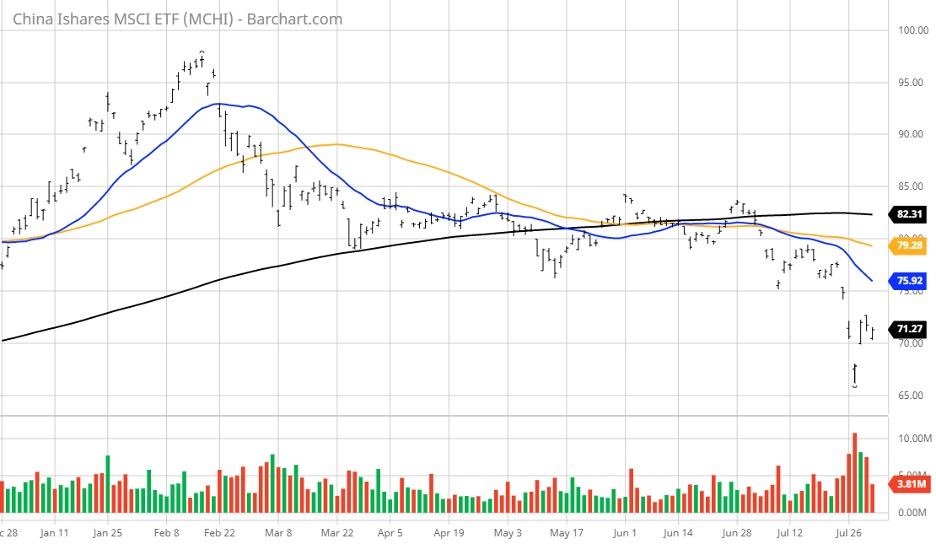 Hong Kong is unique in that it has an open capital account structure without any capital controls. Money can move in and out very quickly and is a fuel for capital flight if triggered by a material decline in real estate values and intervention by Chinese government authorities. The fear arising from the regulatory rampage on Chinese internet platform companies is that it will spread to other industries.

Major global financial firms with a big presence in Hong Kong, such as BlackRock and UBS Wealth Management, are on high alert to protect client assets against future policy changes that could further downside risk to asset valuations. Hong Kong residents are fleeing to the United Kingdom following China’s crackdown in which protestors exercising freedom of expression can face life imprisonment.

Hong Kong is a city that operates under a real estate-based economy and is seeing the highest number of vacant homes hit the market in 18 years. The exodus of people has rental rates sliding by 10%, according to a recent Bloomberg report. The point here is that there are plenty of new reasons for capital to leave China and Hong Kong and find a new home in the U.S. bond and equity markets.

There might be some further back-and-filling following a stellar earnings season and Fed policy meeting. But with so many leading companies raising third-quarter and full-year guidance, the firehose of liquidity from the Fed, Congress and global investors into U.S. stocks should keep any and all corrections short and shallow.