The stock market enjoyed its best month in a long time, pulling up off of the June lows and putting in a healthy performance for July. Earnings season has been anything but the “whistling by the graveyard” scenario so many notable Wall Street gurus had been touting. After all, they are supposed to have the most inside-inside channel checks of the biggest and most important companies to the market’s core health.

They couldn’t have been more wrong. On July 25, just before some of the biggest names in the chip sector reported, Barclays went out on a limb stating that a “large cut to earnings is likely coming over the next 12-18 months” and called for a 30-40% earnings cut.

“The point here is that this downturn in not relegated to just the low-end Consumer markets, and we see the weakness in those markets today as a precursor to corrections in markets such as Industrial, Auto, and the Data Center. We don’t like much of anything in the group and think the recent bounce only sets up a higher bar for the correction coming,” an analyst wrote in a client note.

To have called a top in the chip sector before the biggest and best names reported is somewhat confusing. Why not wait to have the luxury of current business conditions and forward guidance to work off of since the analyst is making a 12-18-month call?

As it would turn out, those chip companies with the most exposure to the auto, industrial and cloud space not only reported better-than-expected Q2 results, but they also provided glowing forward guidance of future demand.

Also jumping in front of the earnings train and getting run over, famed portfolio manager Dan Niles came out on July 26 and touted that he sees “an ugly week ahead for Microsoft (NASDAQ:MSFT), Alphabet (NASDAQ: GOOG), Amazon (NASDAQ: AMZN) and Apple (NASDAQ: AAPL).” He also stated that he dumped a number of internet and mega-cap tech stocks going into earnings week.

Whatever Niles is trading in his hedge fund is his business, but to have a global platform the size of CNBC and cry wolf as loud as he did surely influenced millions of investors to bail on their positions before earnings crossed the tape — only to see these very stocks gap higher after reporting.

Then there is the venerable bear, Morgan Stanley’s Mike Wilson, a U.S. equity strategist and chief investment officer, defending his bear case on July 27 after the S&P has gained 8% in 10 days, stating the post-Fed rate hike rally is “a trap” and that he “believes stocks are on a collision course with more pain due to the economic slowdown and investors should resist putting their money to work in stocks.”

As a weekly guest on CNBC, its viewing audience gets a steady diet of his bearish world view. He was bearish during all of 2021 when the market soared, was right for six months and is now doubling down on his negative thesis. The numbers are not working in Mr. Wilson’s favor.

Lastly is super-bear 83-year-old Jeremy Grantham, co-founder of Boston asset manager GMO, who spoke on July 26, tripling down on his end of days for the stock market forecast. In a Bloomberg “Front Row” interview, Grantham described what he considers “only the fourth super bubble in U.S. history,” reiterated that a crash is imminent and advised exiting U.S. stocks altogether. He predicted a drop of almost 50% in the S&P 500 and said “no amount of Federal Reserve intervention could prevent it.”

Grantham oversees $65 billion in nine funds, only one of which has outperformed the MSCI World Index over the past five years, according to Bloomberg. But when he talks about the sky falling in on equity investors, here too, he has a global platform that has scared millions of investors out of the market. It is true that if you say something long enough, you’ll eventually be right.

To Mr. Grantham’s credit, his position warrants consideration, but coupled with these views from Niles, Miller and a host of other bears, it should be of no surprise the market was on eggshells coming into the reporting season. Thankfully, its not turning out to be a bursting stock bubble.

The latest data from the Atlanta GDPNow flash read from July 29 now shows a forecast of 2.1% growth for the third quarter, revised higher from the -0.9% reported only three days prior. If this is a trend reversal, and it sure does have the look and feel of one, then it stands to reason that when the next pullback for stocks occurs, probably post-earnings season, fund managers holding high levels of cash will buy the dips. 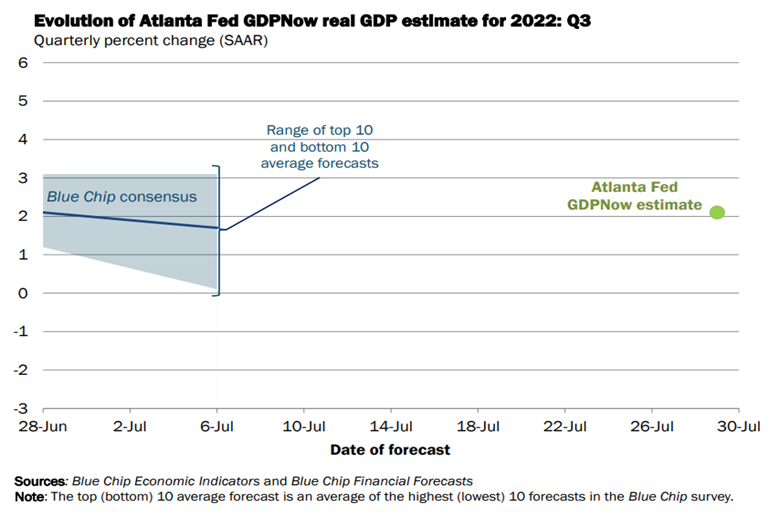 There is a lot of pride on the line for these famous market seers, but investors might want to turn down the volume on the TV and pay more attention to the lines on the charts, like that of the VanEck Semiconductor ETF (NASDAQ: SMH), which tends to be a leading economic indicator. Assuming the charts don’t lie, there is a new bull case for the chip sector following the current upside break above the multi-month downtrend line. 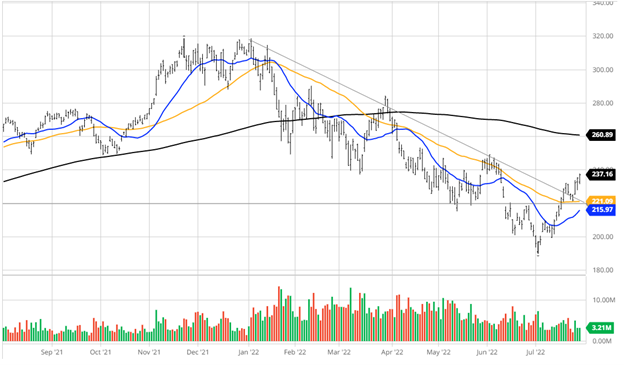 Many times, it is darkest before the dawn, and sentiment was definitely dark coming into the Q2 earnings season. What we are quickly discovering is that sales and earnings were nowhere near as bad as feared and commodity prices corrected, setting lower future inflation data in motion. Meanwhile, bond yields have retreated sharply, the labor market remains very healthy, there is an ongoing shortage of housing supply and the Atlanta Fed is upping its growth forecast.

August and September are historically the worst months for stock market performance, so there is potentially an excellent window to put capital to work in those sectors and stocks that shined in Q2 and also put forth the rosiest guidance. One more broad pullback for this short-term overbought market and there could be some Goldilocks sightings after Labor Day. Make your list, and check it twice.