The record-setting rally in Bitcoin and other cryptocurrencies is being attributed to this week’s listing of the first Bitcoin futures exchange-traded fund (ETF), using the ticker (BITO), that ProShares is bringing to market.

Sure, there is definitely some pricing correlation to this new ETF, but on a wider scale, there is more going on that I believe is not getting enough coverage. Around the world, there are certain developments underway that should be putting a bullish bid under gold, but cryptocurrencies currently seem to be more accepted as an inflation hedge and a ready currency for everyday purchases, deflating interest in precious metals.

Try spending gold coins at the mall. You can’t. But consumers can shop till they drop with Bitcoin through a PayPal account.

You can buy more things than ever with cryptocurrency these days. Such purchases range from video games at Microsoft (NASDAQ:MSFT) to new furniture from Overstock (NASDAQ:OSTK). Consumers can use Bitcoin to purchase gift cards from services like eGifter or Gyft and then redeem them at Amazon (NASDAQ: AMZN), Home Depot (NYSE: HD), BestBuy (NYSE: BBY) and hundreds of other popular retailers.

As these inroads for Bitcoin cannot be ignored or denied, the most powerful banker in the world, Jamie Dimon, CEO of JP Morgan Chase & Co. (NYSE: JPM), claims cryptocurrency is “worthless” and is the financing mechanism for all ransomware and a huge factor in global drug trade, weapons trade, human trafficking and a host of activities on the dark web. He is right about the evils of cryptocurrencies, but to date, quite wrong about their being worthless.

China’s central bank has announced that all transactions of cryptocurrencies are illegal, effectively banning digital tokens such as Bitcoin.

“Virtual currency-related business activities are illegal financial activities,” the People’s Bank of China said, warning it “seriously endangers the safety of people’s assets.” Clearly, China’s governing party is doing all it can to stem the undetected flow of capital out of its financial system.

Aside from these aspects of why cryptocurrencies are trading higher, how about what’s occurring with the breaking down of some of the major global currencies – namely the euro and the yen? The three-year chart of the euro shows that currency breaking some key support levels and heading back down to where it traded during the panic lows of the COVID-19 outbreak in the March-April 2020 timeframe. 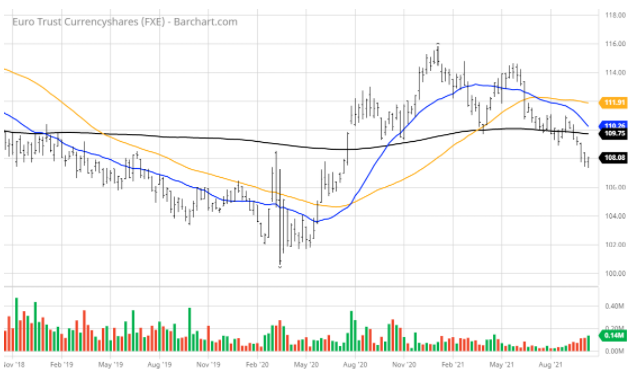 The three-year chart for the yen is more disturbing, with that currency knifing through its support going back to early 2019. 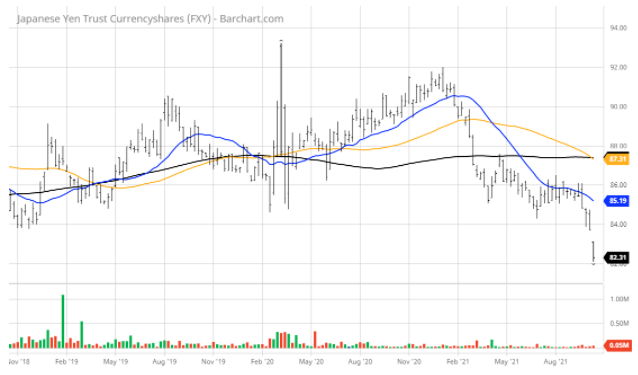 One has to wonder if these mountains of debt can ever be repaid, or whether the currency vigilantes may have a legitimate case that the central banks, in conjunction with the corresponding ruling governments, will monetize the debt and simply print enough currency to retire debt in part or fully. History would show that the underlying currency depreciates in value, and I suspect that the weakness seen in the euro and the yen might be due to speculation that central bank monetization is coming.

Much of the news that investors receive daily surrounds the topic of inflation and how to hedge against it in the form of either liquid or non-liquid assets. Precious metals have helped investors preserve their purchasing power for centuries. They can’t be printed out of thin air like fiat money.

Investors often rush toward gold in times of crisis, making it the go-to safe haven asset. Silver is also a store of value and a hedge against inflation. At the same time, it is widely used as an industrial metal so it could also outperform in a high growth, high inflation environment.

The most direct way to play precious metals is to own bullion. But that can be difficult and expensive. An easier method is to invest in large mining companies. In this case, the VanEck Gold Miners ETF (GDX) is one way to cast a net over the sector to avoid single stock risk where there is plenty in the gold mining industry.

In the 15-year chart below, GDX is sitting on a key trendline that makes for some consideration at a time when cryptos have taken the spotlight from gold and silver. 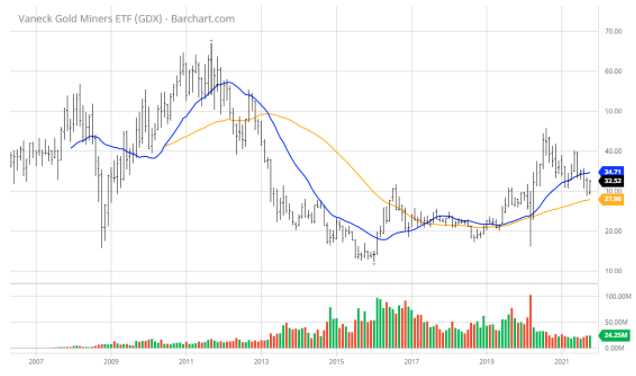 It may be worthwhile to let history be a guide and purchase some precious metals and/or mining stocks as cryptocurrencies could face government pushback, causing major developed currencies to weaken further and central banks to monetize debt loads that might prove unsustainable down the road. An allocation to gold might not seem very sexy at the moment, but when it comes back into fashion, it will shine brightly.