Within the body of his speech, Powell stated that substantial further progress has been met to achieve targeted inflation. He added that if the economy evolved broadly as anticipated, it could be appropriate to “start reducing the pace” of asset purchases this year.

Powell noted the spread of the Delta variant of COVID-19 and how the Fed will carefully assess incoming data that include inflation numbers, retail sales, employment figures and consumer sentiment before the next Federal Open Market Committee (FOMC) meeting on Sept. 22. He also made clear that winding down quantitative easing (QE) would not imply the raising of the Fed Funds Rate. That interest rate is important since it is used by depository institutions to lend reserve balances to other depository institutions overnight on an uncollateralized basis.

“The timing and pace of the coming reduction in asset purchases will not be intended to carry a direct signal regarding the timing of interest rate liftoff, for which we have articulated a different and substantially more stringent test,” Powell said.

“We have said that we will continue to hold the target range for the federal funds rate at its current level until the economy reaches conditions consistent with maximum employment, and inflation has reached 2% and is on track to moderately exceed 2% for some time. We have much ground to cover to reach maximum employment, and time will tell whether we have reached 2% inflation on a sustainable basis.”

These three-word groupings triggered buy programs among prop-shop algorithms and signaled to the wait-and-see, cash-rich investors that as long as Chairman Jay Powell is at the helm through February 2022, he doesn’t see the current inflationary pressures in the same light as several of his lieutenants voiced leading up to last Friday, Oct. 27, to the surprise of Wall Street. Powell stuck to his “transitory” narrative, but when you think about it, why not?

July was full of economic data points that were downside surprises aside from the July labor report that was predominantly based on the pre-Delta variant surge, and it would totally behoove Powell to see if the August data doesn’t corroborate the weaker July data so as to determine how to shape fiscal policy at the September FOMC meeting. If the consumer is in the process of a spending slowdown, Powell is probably figuring prices for goods and services have peaked.

Consider the Aug. 13 release of the final University of Michigan Consumer Sentiment Index for August checking in at 70.3, nearly even with the preliminary reading of 70.2. The final reading for July was 81.2. The downturn from July was one of the largest losses since 1978. This is Twilight Zone data, since the Current Economic Conditions Index came in at 78.5 versus 84.5 for July, while the Expectations Index fell to 65.1 from July’s reading of 79.0.

Consumer spending accounts for two thirds of gross domestic product (GDP) and Americans went on a June-July spending binge, most of it on borrowed money. According to Briefing.com, the expansion in consumer credit in June was the largest since December 2010 with healthy demand for both revolving and nonrevolving credit. Revolving credit saw its biggest increase since January 2006. 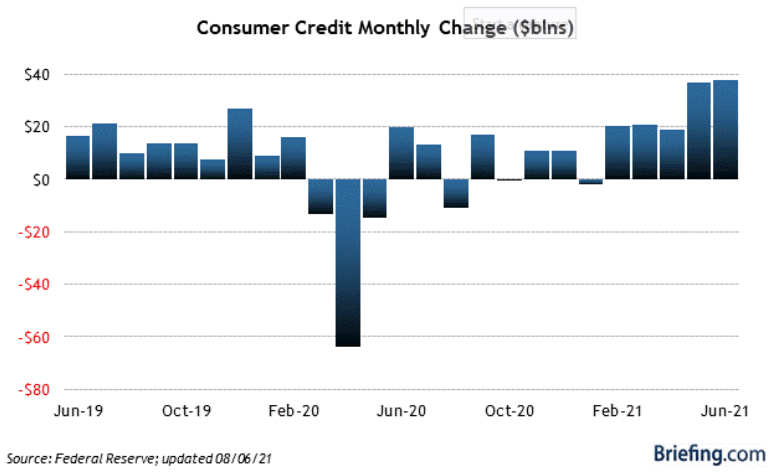 At the lower end of the economic spectrum, unemployment benefits run out on Sept. 6 for millions of Americans, and inflation makes just getting by a major challenge. But with an estimated 10 million jobs needing to be filled, there isn’t any motivation on Capitol Hill to provide more money.

Recently, I was in my local Italian restaurant, and the manager told me that the state of Virginia requires unemployment recipients to provide proof of applying for jobs on a weekly basis in order to receive unemployment benefits. But Virginia doesn’t require proof of whether applicants were offered the job or not, just the application. What’s happening is the restaurant is hiring the applicants, but they are ghosting (not showing up) on day one of employment and gaming the system. Apparently, this is a wide-ranging practice and not helping the cause of extending unemployment benefits to the truly needy.

Back to the economic calendar. The Empire State Manufacturing Index for the New York region in August slumped to 18.3 versus a consensus forecast of 26.0. Retail sales for July fell -1.1% versus -0.2% consensus, ex-auto -0.4% versus 0.2% consensus and the Philadelphia Fed Index for August dropped to 19.4 versus consensus of 24.0. The huge increase in the personal savings rate during the pandemic has all but vanished during the summer months, and that is a data point that I believe Powell is focused on.

It just makes sense that Fed Chair Powell kept beating the dovish drum when the most recent numbers show a more cautious trend among consumers, especially those at the margin where much higher gas, food, services and utility prices are slamming middle- class families and people on fixed income. Against this backdrop, the market celebrated Powell’s speech and the FOMO rally began.

The best-read comments from among investment houses indicated that the Fed Funds Rate won’t be raised above its current 0.00%-0.25% level until 2023. QE likely will start to wind down, but interest rates on the short end likely will remain near zero. That forecast begs the question that if the Fed is not going to regard inflation as a real long-term threat and keep downward pressure on bond yields via QE purchases, where do investors go for income that absorbs higher inflation and taxes but still provides a meaningful return yield?

One sector that does get the job done in a recovering economy is the business development company (BDC) sector. For the uninitiated, BDCs lend money to small to medium-sized private businesses that need to access capital right away. The loans typically command rates of 8-15% and are in the amounts of $3-$25 million, if not higher.

They are structured like real estate investment trusts (REITs) and thus have to pay out at least 90% of all funds from operations in the form of dividends. Most of the loans are variable-rate and many come with equity kickers in the event of exits that result in initial public offerings (IPOs). Dividend yields on BDCs range from 6-14%, so some meaningful due diligence is required before investing in the space. But in my view, the timing is pretty good.

First of all, if annual GDP is growing from a lowered forecast of 5%, that’s still 5%, and that will be reflected in robust sales and earnings of the private sector. BDCs will be able to borrow money at less than 2% or float stock to make loans that provide for outsized dividend yields at a time when inflation, transitory or not, is very real right now. With 45 publicly listed BDCs to choose from, there are some prime income opportunities.

The Cliffwater BDC Index (CWBDC) mirrors the S&P BDC Index, but is a cleaner chart as it shows how BDCs trade relative to NAV.

Top holdings for the index are as follows, and they account for roughly 75% of total composition. Go to www.bdcinvestor.com for information about these and the rest of the BDC universe of listed stocks. In my Cash Machine high-yield advisory service, both Ares Capital (ARCC) and FS Investment (FSK) are model portfolio holdings.

As long as the Fed has the back of this secular bull market, the risk/reward for BDCs is worthy of consideration. There are few, if any, other sectors that offer the kind of income stream that so many people need to fight the forces of inflation and remain 100% invested in U.S. companies. If income is a top priority in a stingy world of conventional yield, then take a hard look at BDCs as the economy continues to rebound.