Will the Bull Market Stand the Test of New Taxes?

The old saying that “the only two things we can be certain of in life are death and taxes” came to light this past weekend when the G7 nations passed a resolution to set a global corporate minimum tax rate of 15%.

The G20 nations will meet in July to weigh in on their support for this endeavor, but some low-tax nations, such as Ireland, could opt out or try to talk down the rate. From there, the 140-plus nations that make up the Organization for Economic Cooperation and Development (OECD) will convene at a later date to further the effort. 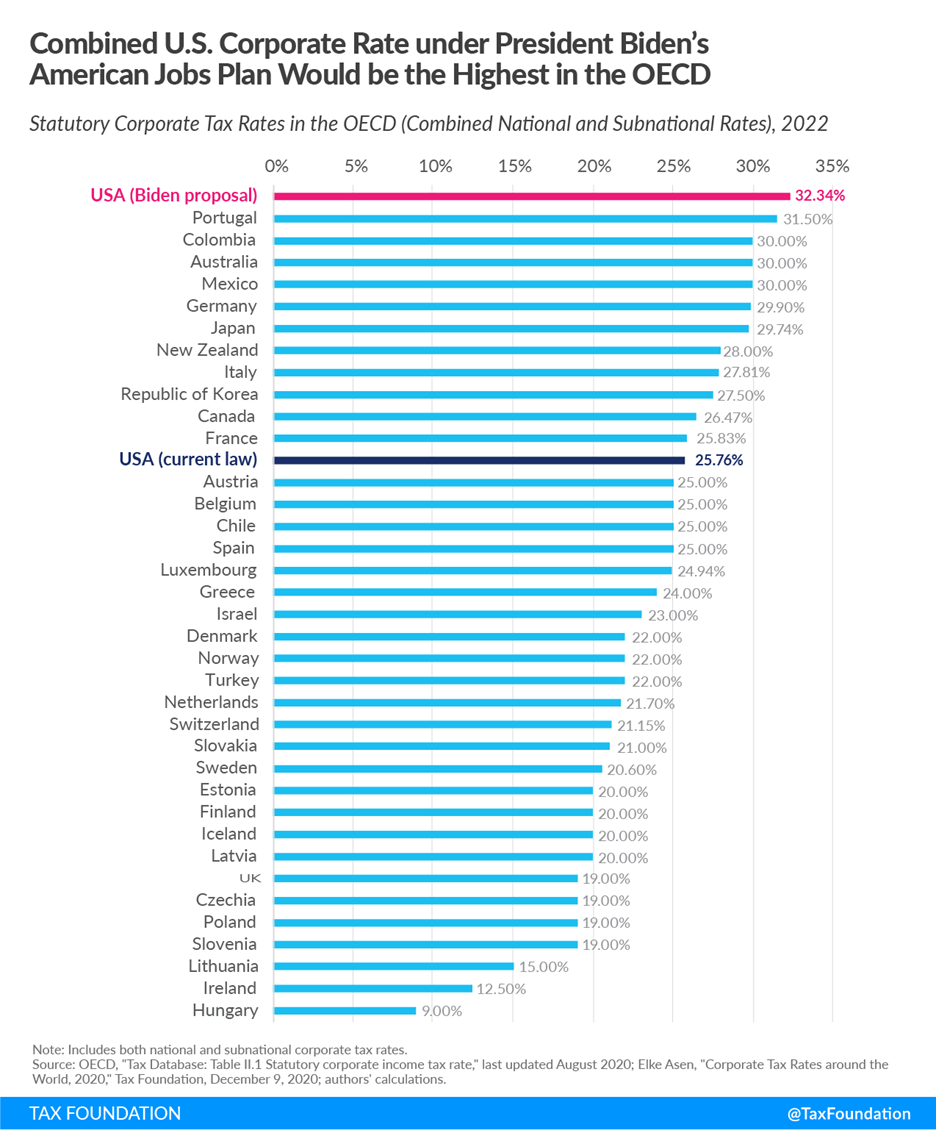 The debate about whether this is a good development for the stock market in the United States and around the world will take center stage during the next two weeks. End-of-quarter window dressing and exchanged-traded fund (ETF) rebalancing activity will occur over this time frame as well. However, it is not like professional market participants did not know that there was genuine momentum for a global minimum tax heading into last weekend. Stocks rallied sharply on the Friday leading up to Saturday’s G7 gathering in London. The Nasdaq gained 200 points, or 1.47%, as the FAANG stocks — of Facebook (NASDAQ:FB), Amazon.com (NASDAQ:AMZN), Apple Inc. (NASDAQ:AAPL), Netflix, Inc. (NASDAQ:NFLX) and Google’s parent Alphabet (NASDAQ:GOOGL) — moved broadly higher in confident fashion.

As much as the market hates uncertainty, it loves even more clarity regarding large global issues that can truly move the needle of bullish/bearish momentum. Knowing the power and skill of internal tax manipulation within multinational corporations, the prospects of establishing a floor where all companies must pay, no matter where their revenues are sourced, is a standard to which most investors likely will warm up. 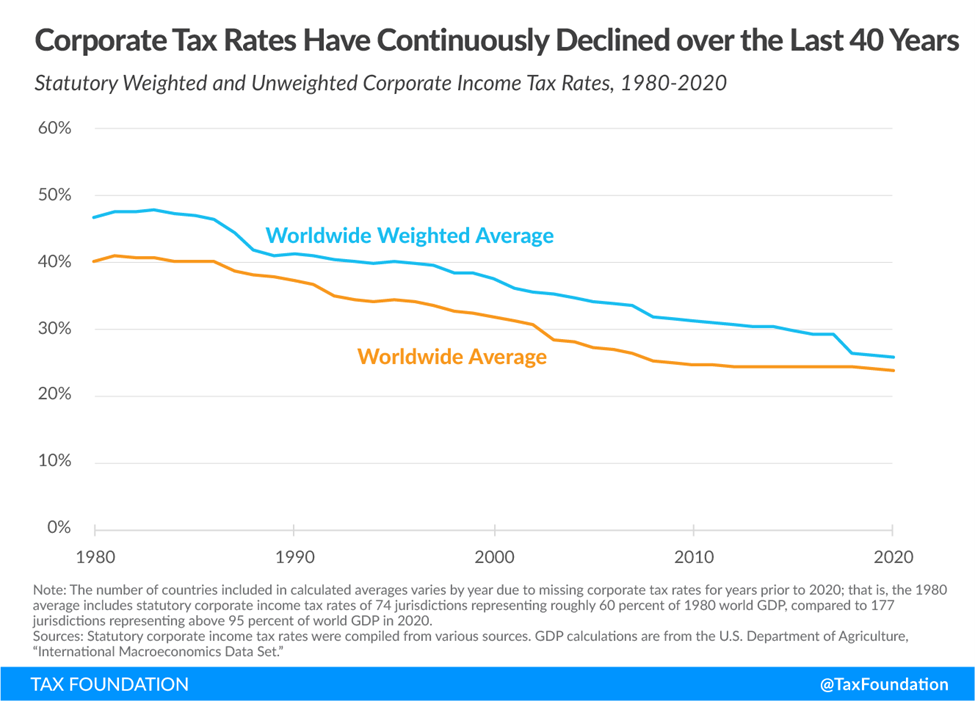 Adding to the tax dialogue, President Biden, who ran his campaign on raising the domestic corporate tax rate to 28%, offered to keep the rate unchanged at 21% but also proposed a 15% tax floor after deductions and credits in a bid to gain support for new spending measures from Republicans. The market approved of such a measure, as it lends credit to the idea that companies won’t be moving operations overseas — thereby eliminating jobs here at home.

It is hard to find an explanation for the shift in President Biden’s policy, for it surely doesn’t sit well with the liberal progressive wing of the Democratic party. However, it’s likely that an influx of special interests and the risk of losing out in the midterm elections in 2022 had something to do with it. Clearly, there were problems with seeing through a big tax hike on a simple majority vote, and Biden compromised to avoid defeat or delay.

The takeaway from the past few days regarding both the domestic and global tax scenarios is one of a more level playing field for all corporations, instead of one where only the most influential and agile companies with the deepest benches of tax experts win out every year. It is too early to fully know the implications of these policies, but at first glance, they appear to be going to produce higher stock prices going forward. 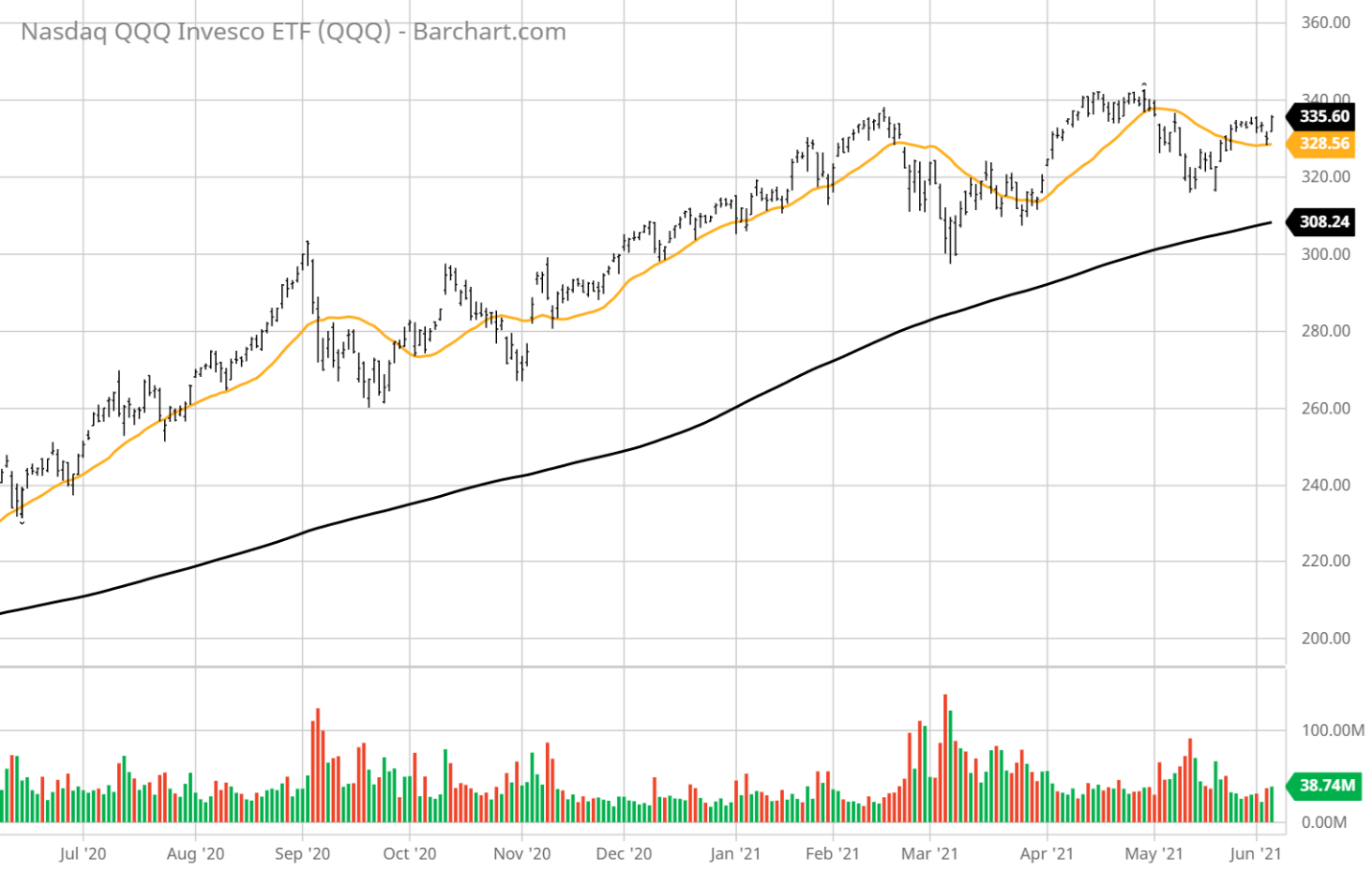 This would especially be true for the big growth stocks within the Nasdaq that have the highest profit markets and generate the greatest net income and profits. The chart of the Nasdaq 100 (QQQ) above showed an index that was starting to falter under the weight of sector rotation out of growth and into value, as well as the cautionary tone of significantly higher taxes on future earnings.

These recent developments are suddenly dispelling some of the fears, and optimism could be restored quickly in the days ahead. This could lead to a broad market melt-up to close out the second quarter, easily sending the QQQ to new all-time highs. The market is awash in liquidity, Friday’s employment data seemed Goldilocks-like for the bond market, king dollar is holding its key technical support and the Fed Fund Futures only give a 7% chance of a Fed rate hike by the end of the year. Per the latest forecast for Q2 2021 by FactSet, the estimated earnings growth rate for the S&P 500 is 61.0%. If 61.0% is the actual growth rate for the quarter, it will mark the highest year-over-year earnings growth rate — 108.9% — reported by the index since fourth-quarter 2009. 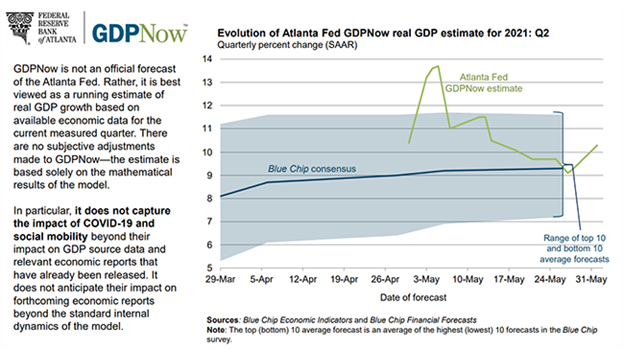 The GDPNow model from the Atlanta Fed is estimating real gross domestic product (GDP) growth (seasonally adjusted annual rate) in the second quarter of 2021 is 10.3 percent on June 1, up from 9.3 percent on May 28. This turn higher of 1% in the span of three days comes on the back of a strong Institute for Supply Management (ISM) and new construction spending reports.

With economic growth and corporate earnings being revised higher, coupled with what is seemingly a more equitable set of tax initiatives in the future, there is a strong and growing case for staying fully invested in what historically has been a tougher time to make money in stocks.