Will The S&P Hold This Crucial Long-Term Trend Line?

What a rough ride for investors this month.

The stock market has declined 11 of the past 12 weeks, with the past week being the worst since March 2020. Just to highlight the events that have taken the market to this point, the Consumer Price Index (CPI) data of two Fridays ago killed the short-term peak inflation narrative until this past week’s economic data pointed to a marked slowdown in the making.

The Philadelphia Fed Index for June came in a -3.3 versus consensus forecast of 5.0. The data point is a regional Federal Reserve Bank index that measures changes in business growth, which has showed material slowing in May. Housing Starts for May were 1.549 million versus a forecast of 1.715 million, and building permits for May were 1.695 million versus 1.800 million forecasted.

Some of the changing sentiment surrounding the slower housing and retail sales data for May is surely to show a further deterioration when the June data comes out. The 75-basis point rate hike was initially seen as a good move on the part of the Fed, but was quickly repelled by investors after the Swiss National Bank and other central banks moved to raise rates overnight with little or no notice.

There is also the notion taking hold that coming into this period of Fed tightening, households with robust levels of accumulated savings would weather the soft landing orchestrated by the Fed into the fourth quarter, with the economy resuming its 3%-4% growth rate, accompanied by inflation falling to around 4%. As of last week, the case for a hard landing became more prominent, but here, too, could just as easily improve with further softening of energy prices, any hint of new negotiations in Ukraine or further unclogging global supply chain snarls.

One good development was seeing the market trade flat to up on last week’s quadruple options expiration for June. Another was real evidence of hard and soft commodity prices declining amid a stiff selloff in energy. It seems as if the market is experiencing some seller exhaustion that has the S&P now trading with a price-to-earnings (P/E) ratio of 15x, and down at that level this is quickly approaching a crucial 200-week moving average sitting at 3,500 — a technical level that is likely to invite a very strong bid to hold this line. 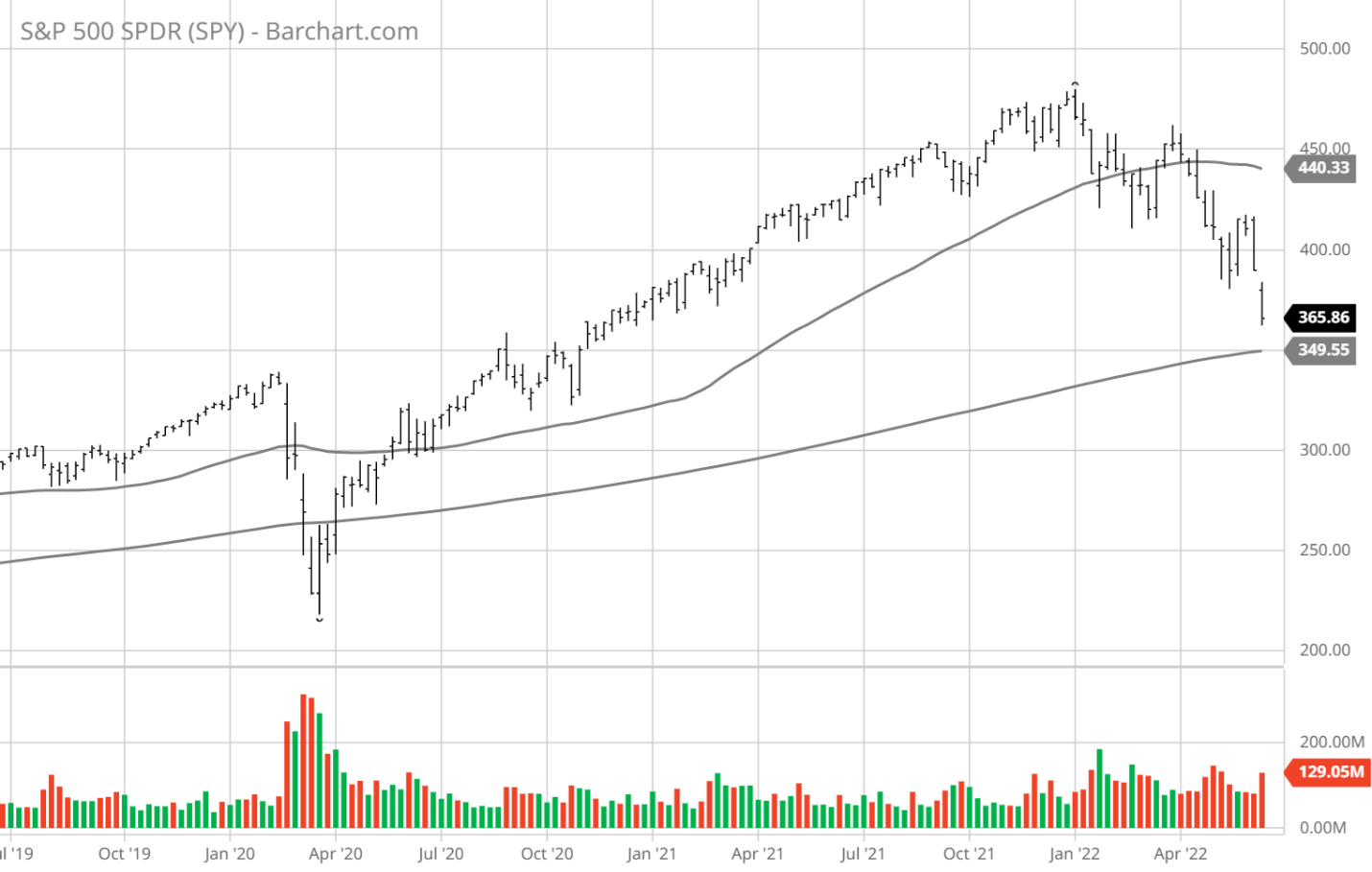 In another development that the market is positively embracing, but is sure to draw the ire of politicians and critics alike, the Biden administration is considering lifting tariffs on China to attempt to bring down inflation. American and European business leaders are applying ample pressure to lift tariffs to improve supply chain conditions. Just to review, the tariffs were not applied lightly. They targeted egregious behavior by China, that to my knowledge, have yet to be resolved to any degree.

And these major transgressions don’t even begin to address the forced labor of the Uyghar people and internment camps in the Xinjiang region. Despite these widespread violations of human rights, the Australian Strategic Policy Institute (ASPI) has identified 27 factories in nine Chinese provinces that are using Uyghur labor transferred from Xinjiang since 2017. Those factories claim to be part of the supply chain of 83 well-known global brands. So much for maintaining the moral high ground.

Investors will be on the lookout for how a stronger dollar is curtailing earnings prospects for U.S. multinational companies. Microsoft Corp. (MSFT) has already made known that earnings will be impacted by forex headwinds, and Adobe Systems Inc. (ADBE) echoed the same issue in their most recent quarter results. (I have no position in either company). This is a known risk at this point, and has probably been priced in as part and parcel to the recent market weakness.

The market is now on earnings warning watch, on high alert for companies to pre-announce lower profits due to higher borrowing costs, transportation costs, lockdowns in China and slower inventory builds due to deteriorating consumer confidence which registered the lowest reading on record. 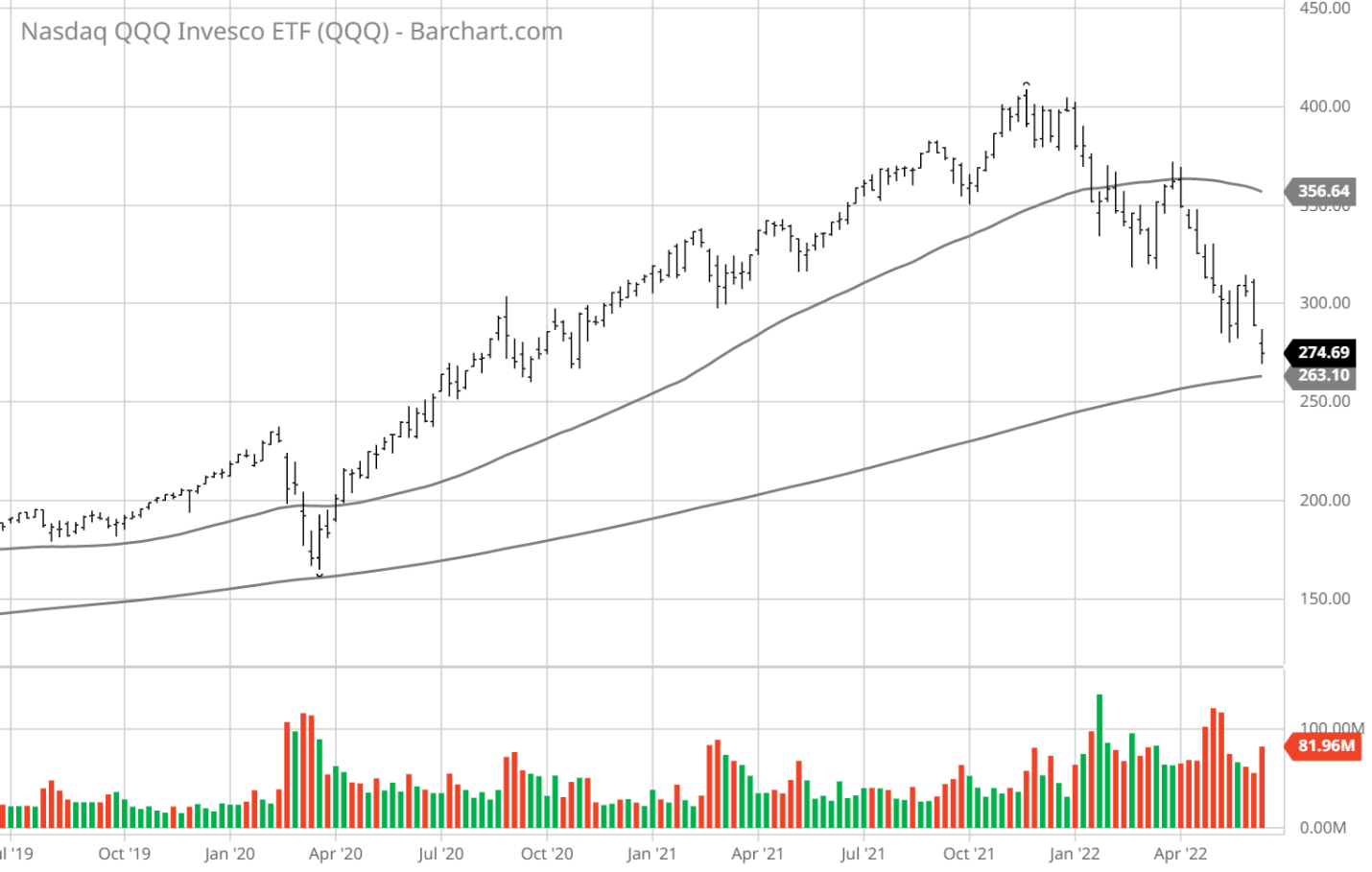 The next two to three weeks will likely see the market witness a lot of choppy and lateral movement, seeking catalysts and hanging on to every data point. But investors should know that individual stocks tend to bottom 3-6 months before the major averages do, and there are multiple cases of leading market stocks that have corrected 40-50% even as the S&P 500 has shed 23%.

While at a large gathering this past weekend, I spoke with as many people as possible and asked them how business conditions were. To my surprise, every person said business is brisk, even one homebuilder. Yes, their stock portfolios had tanked 20-30%, but no one was cancelling vacations, season tickets, private school tuition or acquiring new purchases for big-ticket items.

Most of what I observe where inflation is hitting hardest is for the 64% of Americans living paycheck-to-paycheck, which is what could tip the economy into recession if inflation doesn’t swiftly cool by year-end. History shows that as much as the Fed will conduct its operations, markets mostly correct naturally through broad demand destruction.

To say the current economic landscape is highly fluid is almost an understatement, and predictions at this point are, in my view, pure speculation. What does seem clear is that the next 30 days will provide immense insight into whether the market has endured enough pain, while holding the long-term uptrend lines noted above and re-gaining the confidence of investors. That’s the beauty of earnings season, and I can’t think of one that has more significance to the market’s outlook than the upcoming reporting season.