The S&P 500 is trading at a new all-time high as earnings season is taking on the tone of a “glass half full” after the first full week of Q2 results. This is too bad for investment houses like Morgan Stanley, which have turned bearish on stocks and have thus taken their global equity rating to its lowest level in five years. Andrew Sheets, the Chief Cross-Asset Strategist for Morgan Stanley, who looks all of 29 years of age, somehow holds court over all the houses of JP Morgan. He has proclaimed a recession and, ultimately, a steep correction loom. That’s a bold call considering the alternatives.

Just for the record, when there are few places in the world to put vast amounts of institutional money (hundreds of billions of dollars) where there is also at least a positive return on bond yields, an economy with a strong pulse and a solid bid under the currency, why try to call a market top? Again, it’s a bold call and one they hope to generate fame and fortune from. However, it’s probably early.

Quite frankly, the strong money flows into U.S. equities are more of an affirmation that the domestic economy is maintaining steady growth in light of slower growth around the globe. Most institutional money managers keep to themselves in edgy markets, preferring to stay nimble and not make vocal directional calls on the market. It’s tough going on record to predict the future when there is no historical playbook by which the world’s most powerful central banks are operating by.

It was only back in early December, when the Fed raised the Fed Funds Rate by a quarter point, that the market went into a full-blown hissy fit and corrected by a full 20%. Within the past two weeks, the Fed has reinforced their commitment to sustaining the economic expansion, and thus the bull market, by all but ensuring a rate cut in two weeks.

It is fascinating to see how the global stock markets tell the central banks to provide stimulus on demand. But we’re now into a decade of global quantitative easing (QE) and investors have become highly accustomed to, and expect, central bank stimulus to support a healthy stock market. Based on the latest narrative, this remains the case for monetary accommodation at the upcoming Federal Open Market Committee (FOMC) meeting.

Going back to pre-recession 2007, it is remarkable to compare the performance of the S&P 500 against that of the emerging markets, Europe, China and Japan. Since emerging markets are literally at the same level today that they were back in 2007, investors in these markets have made no money. Europe’s market is trading 30% below its best 2007 level. Japan’s market has gained 27% during these past 12 years, averaging 2.25% per year. Investors long the Chinese market are down a whopping 50% from 2007 levels while investors long the S&P are up roughly 150% and averaging about 8.5% per year. 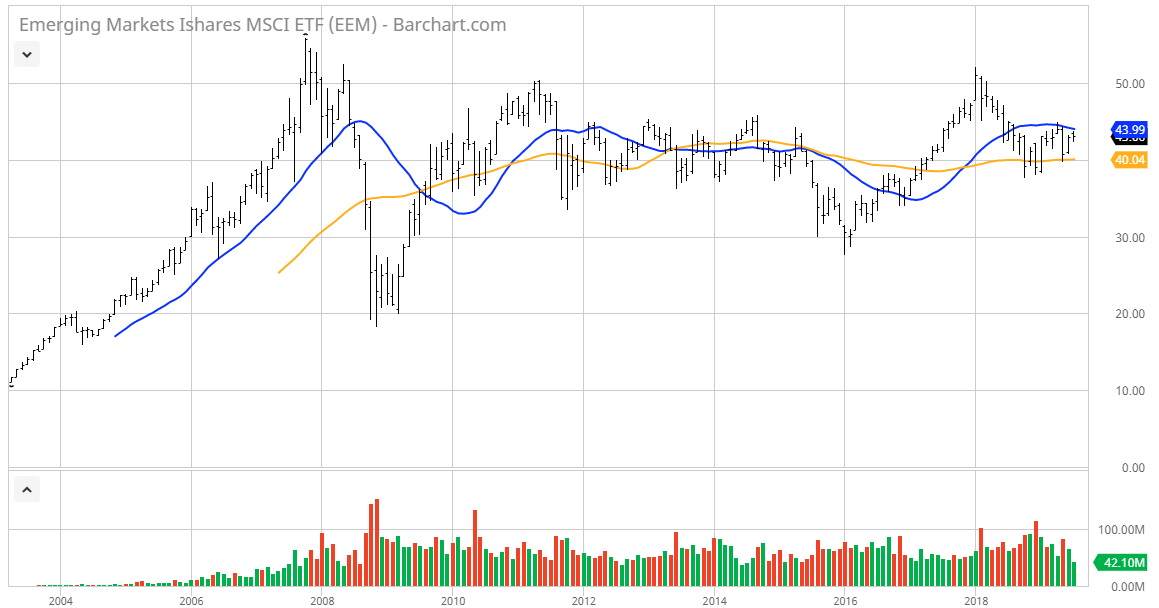 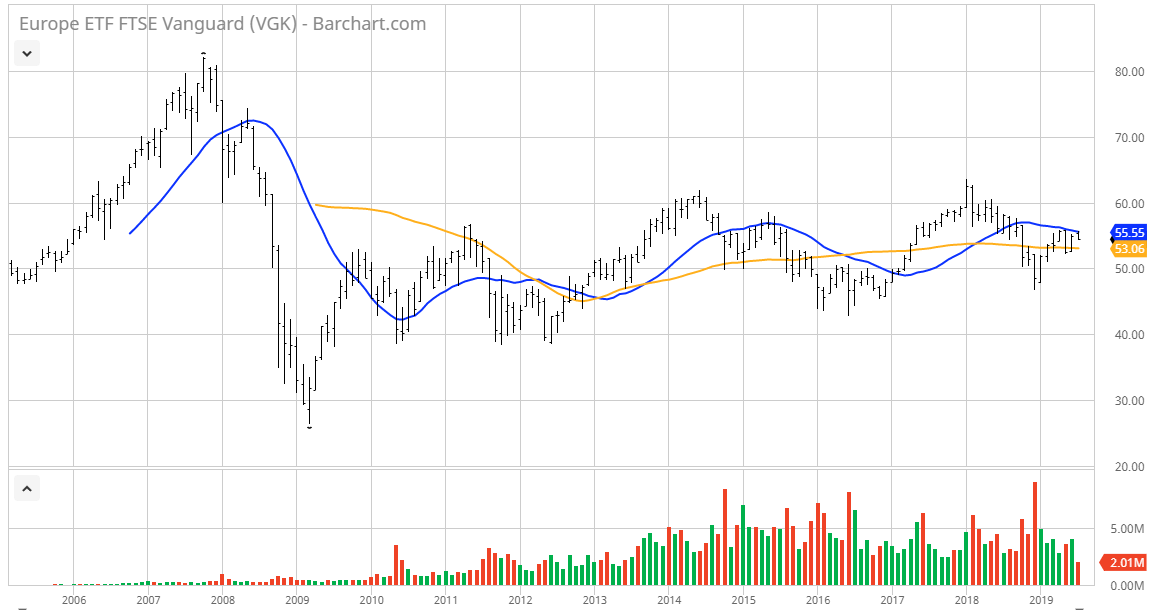 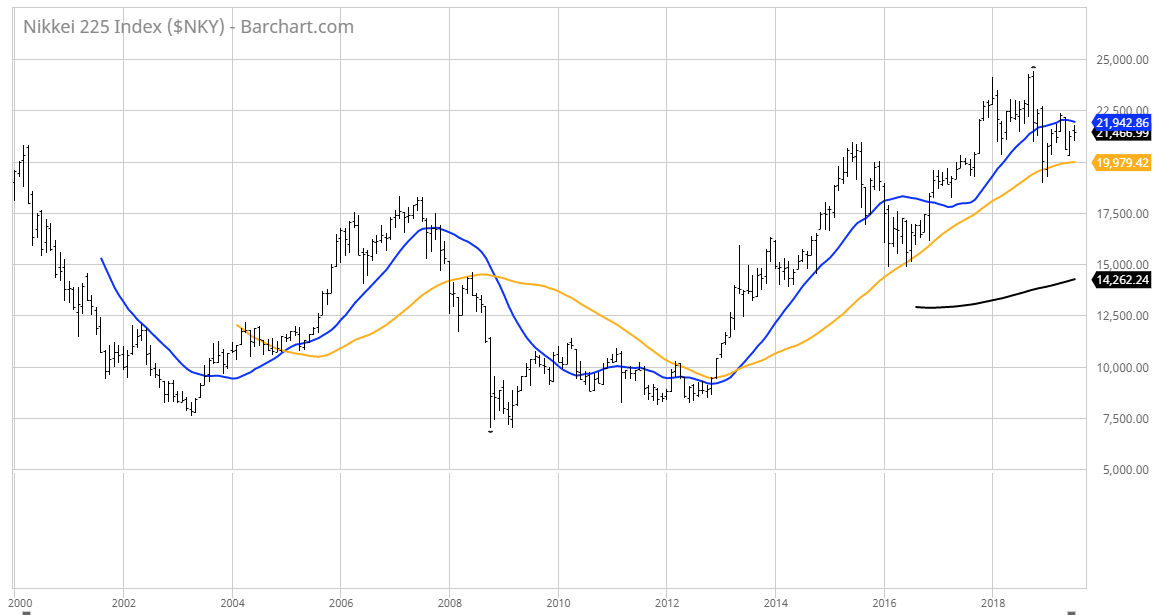 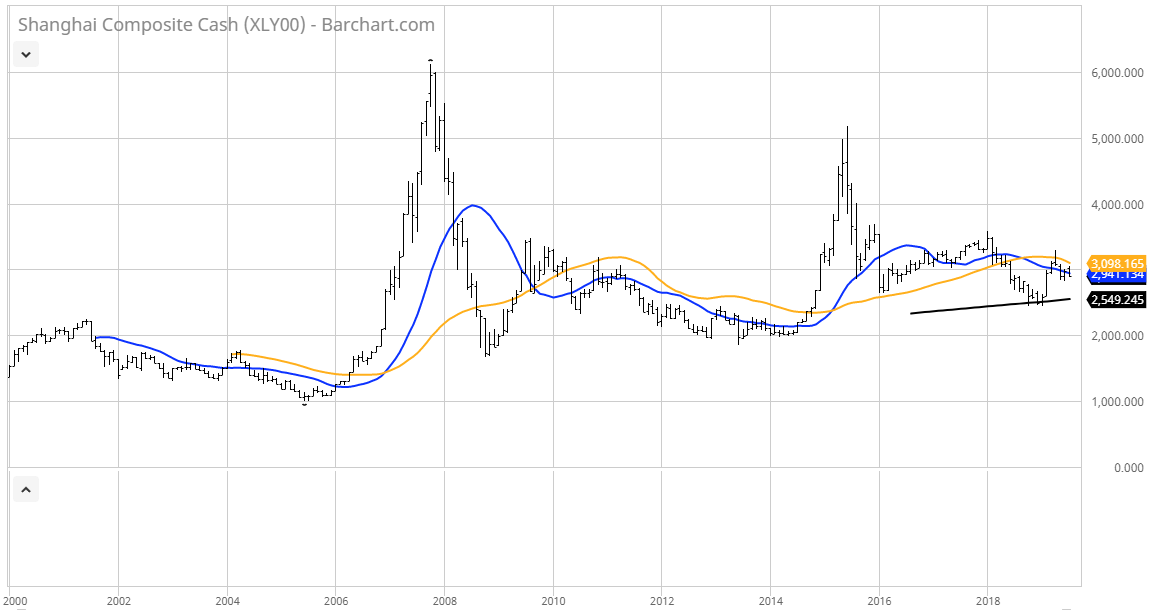 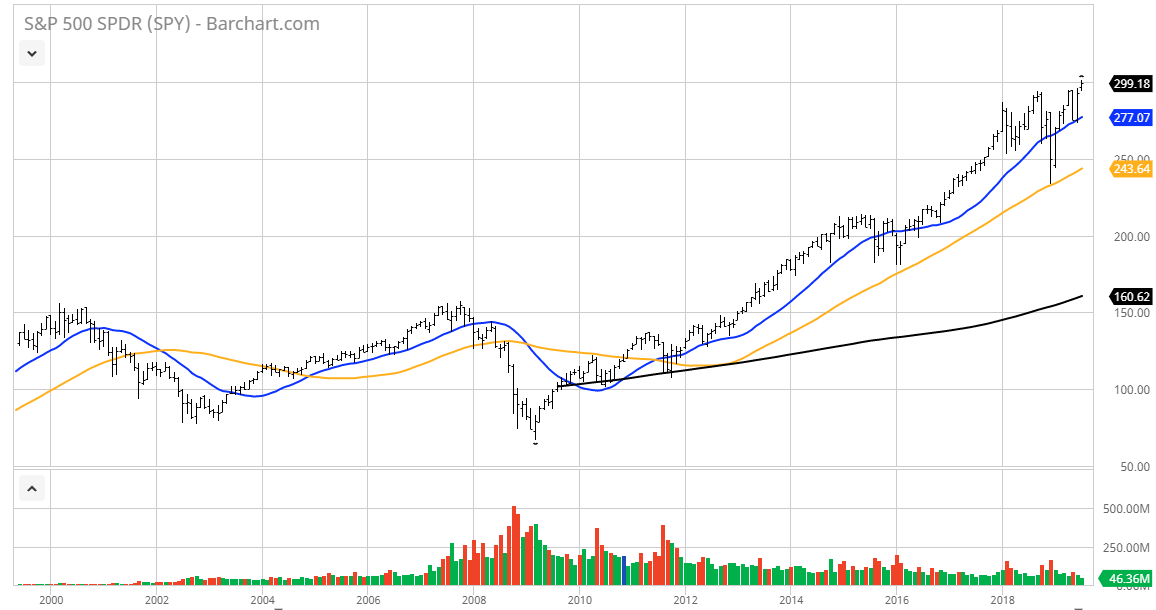 All charts courtesy of Barchart.com

So, if all the QE of the past decade can’t get these ex-U.S. indexes off the mat, I’m not sure what will happen with regards to where we are in the economic cycle. All the Federal Reserve’s efforts to restore inflation to a 2% rate of constant growth have pretty much come up short. This makes the notion of deflationary forces that much more threatening in the global economic downturn that the folks at Morgan Stanley and others claim is just ahead.

A rising fear that the world outside the U.S. is entering a deflationary period is a big part of the reason that 25% of total global debt is currently sporting negative yields. By definition, negative interest rates are intended to incentivize banks to aggressively lend money, since they are being charged negative interest. However, negative interest is also considered a last-ditch effort to boost economic growth when conventional fiscal policy tools have failed.

So far, negative yields have yet to stimulate loan demand from businesses and consumers at a level that will spur sufficient levels of investment and spending so that the central banks can dial back QE. It’s a quandary that has foreign institutions hoarding money, willing to pay the bank to keep it safe while also pouring capital into U.S. Treasuries and equities.

To somehow determine this pattern of money flow is going to somehow come to an abrupt end doesn’t really add up from my perspective. I believe that last week’s market surge is a testament that foreign capital is quickly running out of patience and is in desperate need of being put into strong dollar-denominated stock and bond assets to maximize yield and total return. And as long as this condition continues to persist, the higher the U.S. stock market is likely to go. 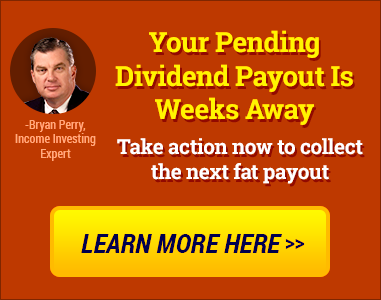