The current investing landscape has been full of surprises and sudden changes that have kept investors and fund managers guessing as to how best to be positioned, even for just the month ahead.

Only two weeks ago, the 10-year Treasury was knocking on the door of the 1.0% interest rate threshold before a blowout jobs report and the passage of an infrastructure bill in the Senate infused the reflationary stock sectors and touched off a frantic bout of selling in the Treasury market, taking the 10-year yield up to 1.37%. 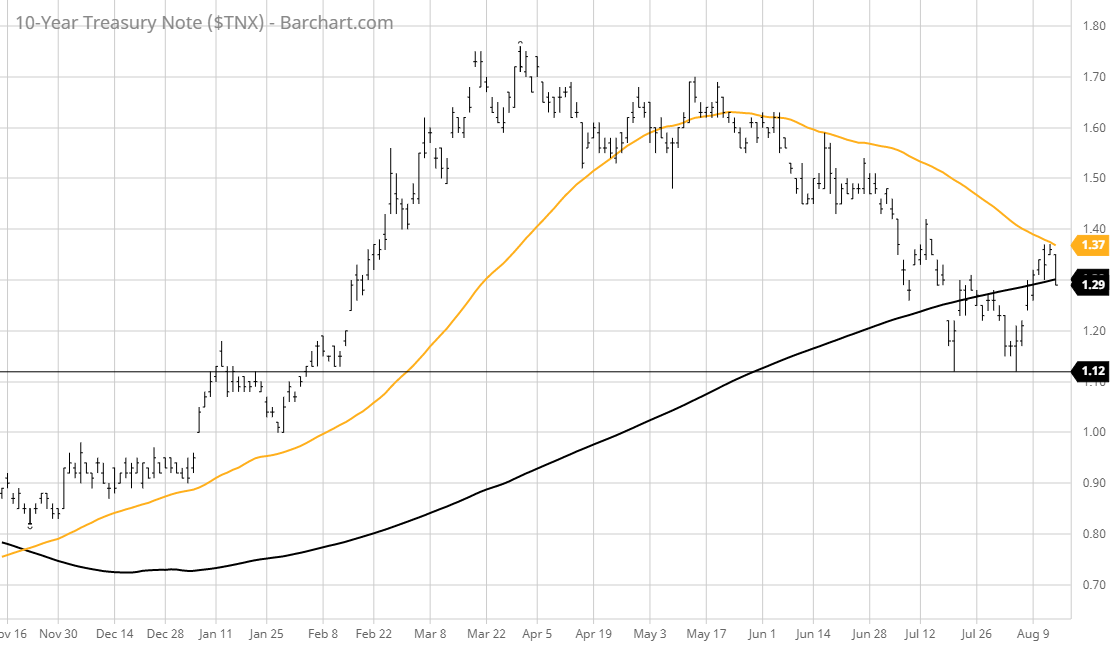 At first glance, this setup looked to be a green light for the stock market to pad its gains, and it did. As of last Friday, both the Dow and S&P closed at new all-time highs, with the Nasdaq within a whisper of a new record and the Russell 2000 still lagging. It was a telling moment for the bid under the market as it seemingly shrugged off what was a big downside surprise in consumer confidence.

The preliminary University of Michigan Consumer Sentiment Index for August had a stunning decline to 70.2, compared to a consensus estimate of 81.6, from the final reading of 81.2 for July. That is below the April 2020 low of 71.8, when fear of COVID-19 was sweeping the nation, and is one of the largest monthly declines in the past 50 years.

Two key data points factored hugely in the report. The Current Economic Conditions Index fell to 77.9 from 84.5 and the Expectations Index dropped to 65.2 from 79.0.

According to the analysis by Briefing.com, “The key takeaway from the report is that the plunge in consumer sentiment wasn’t just related to concerns about the Delta variant. It was linked to all aspects of the economy, the report said, from personal finances to prospects for the economy, including inflation and unemployment. Moreover, the deteriorating sentiment was seen across income, age and education subgroups, and observed across all regions.”

Literally, two-thirds of U.S. gross domestic product (GDP) is consumer-dependent, so when a report like this crosses the tape and the market doesn’t give back 3% or more, then it stands to reason that the market narrative is well camped out in the notion that the Fed will maintain quantitative easing (QE) for longer than what was thought just a week ago. Leave no doubt, this is a shocking number on the heels of a banner earnings season accompanied by robust corporate guidance for the third quarter and the balance of 2021.

It would seem within the body of the report that inflation and personal finances are the culprits and not so much the employment component. After all, the most recent labor data showed a robust hiring atmosphere with “For Hire” signs posted everywhere you look. There has been a sudden and sharp pullback in the Personal Savings Rate to pre-pandemic levels, implying Americans went on a spending binge in the second quarter as the economy reopened.

A scarcity of homes, prime rentals, new cars, used cars and travel options have pushed prices for these and scores of other items and services higher. And American consumers gladly paid the premiums, at least for the past three months, according to the chart below. With both the federal and state governments already scaling back and eliminating monthly assistance and forbearance, the pressure to make household budgets falls squarely 100% back on the consumer, at least in the short term.

The $250-$300 per month cash payment per child under 17, up to $3,600 max per child, has started, but pandemic unemployment insurance will expire Sept. 6. The ongoing health care crisis has people holding out for an extension, and there are advocacy groups calling for continuing the programs, but there is little political momentum behind them right now. Without the supplement, state benefits replace about 38% of a worker’s previous wages on average, according to the Labor Department.

This winding down of benefits affects about 13 million people. While that may sound like a lot, it is less than 4% of the total population. Consumer sentiment crashing like it did this month means future discretionary spending is going to slow and inflation in all its forms isn’t as transitory as the Fed had forecast. This was clearly reflected in last week’s release of the Producer Price Index for July, which showed final demand increased 1.0% month over month, twice the consensus for a 0.5% gain, following a 1.0% increase in June.

According to the Bureau of Labor Statistics, on a year-over-year basis, the Producer Price Index for final demand was up 7.8% on an unadjusted basis, versus 7.3% in June. That is the largest advance since it was first calculated in November 2010. The main takeaway from the report is that producers are, without a doubt, paying higher prices for all manner of inputs, which will likely result in passing on those higher costs to the consumer. And this is just for goods; inflation in the service sector is also way elevated.

I believe this is what is the largest contributor to the trap-door consumer confidence numbers, and one that doesn’t look likely to be tempered anytime soon, with ongoing global supply chain bottlenecks still very prevalent in key industries. Apparently, custom home builders can’t get Viking ranges until early 2022, or Sub-Zero refrigerators until December, due to the shortage of semiconductors for high-end appliances.

Back to the market’s muted response — the major averages held up well, probably due to the rush back into the biggest mega-tech stocks that represent roughly 25% of total assets in the S&P and 50% of total assets in the Nasdaq. That rotation back into big-cap tech was glaringly obvious in Friday’s session, as risk was reduced in consumer discretionary, financials, energy and industrials. Health care, utilities, consumer staples and real estate investment trusts (REITs) also outperformed, making for a more defensive tone as the week ended.

One last observation is how underneath the record highs for the major averages is a deterioration of the NYSE Advance/Decline Line in June and July, having stabilized this month, albeit on lighter volume due to seasonality (vacations). This bears close monitoring as a sign the bull market is getting thinner. Fewer stocks will lead or participate in further gains. To sum it up, there is a firm bid under the market, but it’s more skewed now toward those best-in-class stocks. 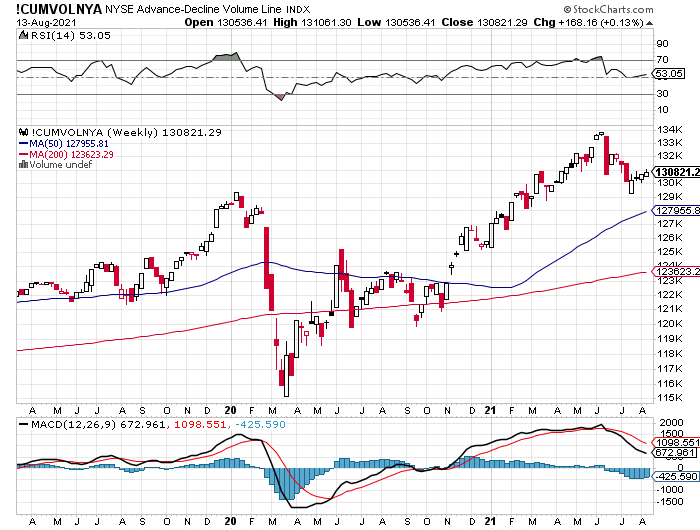